Review: How to Marry a Millionaire Vampire - Kerrelyn Sparks 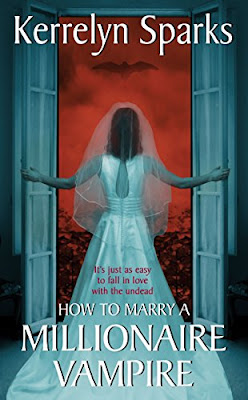 So what if he's a bit older and usually regards a human female as dinner, not a dinner date? Yes, Roman Draganesti is a vampire, but a vampire who lost one of his fangs sinking his teeth into something he shouldn't have. Now he has one night to find a dentist before his natural healing abilities close the wound, leaving him a lop–sided eater for all eternity.

Things aren't going well for Shanna Whelan either...After witnessing a gruesome murder by the Russian mafia, she's next on their hit list. And her career as a dentist appears to be on a downward spiral because she's afraid of blood. When Roman rescues her from an assassination attempt, she wonders if she's found the one man who can keep her alive. Though the attraction between them is immediate and hot, can Shanna conquer her fear of blood to fix Roman's fang? And if she does, what will prevent Roman from using his fangs on her...

Love at Stake Series:
How to Marry a Millionaire Vampire
Vamps and the City
A Very Vampy Christmas (Novella)
Be Still My Vampire Heart
The Undead Next Door
All I Want for Christmas Is a Vampire
Secret Life of a Vampire
Forbidden Nights with a Vampire
The Vampire and the Virgin
Eat Prey Love
Vampire Mine
Sexiest Vampire Alive
Wanted: Undead or Alive
Wild About You
Vampires Gone Wild (Novella V is for VampWoman)
The Vampire With the Dragon Tattoo
How to Seduce a Vampire (Without Really Trying)
Crouching Tiger, Forbidden Vampire

Review:
So Roman isn't your typical suave and sophisticated vampire, in fact he's more of a geeky scientist, but since that's enabled him to create a synthetic blood that vampires can live off instead of munching on humans it's not really a bad thing. His life starts to get complicated when he bites into something he shouldn't have and accidentally pulls out one of his fangs. If he doesn't get it re-implanted before his vampire healing kicks in then he'll forever be known as a one-fanged-wonder and turned into a vampire laughing stock. It's time to find a dentist stat!

Shanna isn't your typical dentist considering she's now terrified at the sight of blood. She's currently living under witness protection after witnessing a brutal murder and agreeing to testify against the mafia but it looks like her new identity has been compromised and her life is now in danger. Luckily Roman turns up just in time to save her life but if she can't get over her fear of blood she's not going to be able to return the favour and rescue his fang.

How to Marry a Millionaire Vampire is the first book in Kerrelyn Sparks' Love at Stake series and what a great introduction to the world she's created. The story was full of humour and the incident where Roman lost his fang had me laughing out loud. It looks like this is going to be a very fun and light hearted paranormal romance series and I'm definitely looking forward to getting to know the other characters better, especially since a lot of them are highland warrior vampires.

I did have a couple of issues with the vampire harem and the way they were portrayed though, it's one of those series where women seem to see each other as competition and therefore the enemy and that's not something I'm a fan of. I'm hoping that is something that will change as the series continues though and I enjoyed the rest of the book enough that I'm willing to look past that and continue reading. I think things are about to get exciting now that the cat is out of the bag and the government are aware of the existence of vampires and it'll be interesting to see how both sides react to that news.