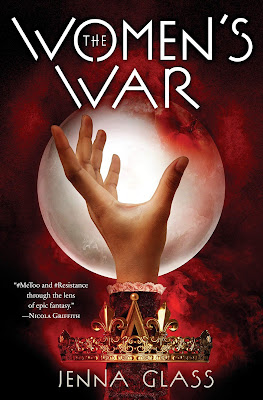 In a feminist fantasy epic, a revolutionary spell gives women the ability to control their own fertility--with consequences that rock their patriarchal society to its core.

When a nobleman's first duty is to produce a male heir, women are treated like possessions and bargaining chips. But as the aftereffects of a world-altering spell ripple out physically and culturally, women at last have a bargaining chip of their own. And two women in particular find themselves at the liberating crossroads of change.

Alys is the widowed mother of two adolescent children, and the disinherited daughter of a king. Her existence has been carefully regulated, but now she discovers a fierce talent not only for politics but also for magic--once deemed solely the domain of men. Meanwhile, in a neighboring kingdom, young Ellin finds herself unexpectedly on the throne after the sudden death of her grandfather the king and everyone else who stood ahead of her in the line of succession. Conventional wisdom holds that she will marry quickly, then quietly surrender the throne to her new husband. Only, Ellin has other ideas.

The tensions building in the two kingdoms grow abruptly worse when a caravan of exiled women and their escort of disgraced soldiers stumble upon a new source of magic in what was once uninhabitable desert. This new and revolutionary magic--which only women can wield--might well tear down what is left of the patriarchy. The men who currently hold power will do anything to retain it. But what force in the world can stand against the courage and resolution of generations of women who have tasted freedom for the very first time?

Review:
The Women's War is the first book in Jenna Glass' new epic fantasy series and it is set in a patriarchal society where women are seen as property, first of their father's and eventually belonging to their husbands. Women are definitely second class citizens in this world and it shows in every aspect of their lives, right down to the fact that it is forbidden for women to use magic. Women are forced to obey the men in their lives and for noblewomen if they disobey they can be sent to the Abbey of the Unwanted, a place of misery where they are basically forced into prostitution to survive.

The magic system in this world comes down to elements that can be combined together in different ways to create the desired affects. The three types of motes are masculine (which can only be seen or used by men), feminine (can only be seen by women) and neutral (that can be used by anyone with enough power to do so). Masculine magic is considered the most useful and used for nearly everything while feminine magic is seen as frivolous because it can only be used for things like healing. It is completely forbidden for women to use the magic unless they're living at the Abbey, in which case they're allowed to create healing spells, although any profits they make obviously go straight to the crown.

This story focuses on what would happen if women suddenly had all the power. After centuries of abuse three women created a spell that would turn things on it's head, suddenly female magic is more powerful but most importantly women have complete control of their own bodies and fertility. Forcing girls into marriage won't work so well if she can refuse to have an heir and it's far easier for them to take control of their own sexuality if they don't have to worry about unwanted pregnancy. Of course this isn't the kind of world where men are going to give up their power easily so things are bound to get worse before they get better but I'm absolutely fascinated to see how we (hopefully) get to a balanced society.

It's probably fairly obvious from what I've said so far that this isn't a pleasant world for women but I should include a warning that there are some scenes of rape and torture that were difficult to read. That's by no means the whole focus of the book but it is there so you should go in prepared for that. There are a lot of nasty male characters in this book that I just can't wait to receive their comeuppance but at the same time there are some strong male allies who don't like the way women are treated and there are a LOT of strong, fantastic women.

The three main stories we follow are of Ellin, a young woman who ends up being the first queen of her kingdom after a terrible accident kills her entire family. She has to deal with a plotting council who want to control her every move, including getting her married off to one of their members as quickly as possible. Then there is Alys, she's a 40 year old widowed mother of two and the daughter of a king but she was disinherited after her own mother was exiled to the Abbey. Alys' mother played a role in the curse that has changed the world and Alys has been given the impossible task of trying to undo it or watching her entire family pay for her mother's mistakes. Then finally we have Alys' daughter Jinnell, a young woman who is being used as a pawn by her uncle and who is trying to figure out a way to avoid marriage to a monster.

I'm not going to say anything about how these stories, and those of the women around them, play out but I will say that I really enjoyed watching them all learn to embrace their new abilities and starting to take control of their lives. The political intrigue was fascinating and I also really enjoyed seeing the women and decent men figure out what they were capable of when they chose to work together rather than against each other. There's a lot going on and I can't wait to read the next book to see how all their journeys continue.