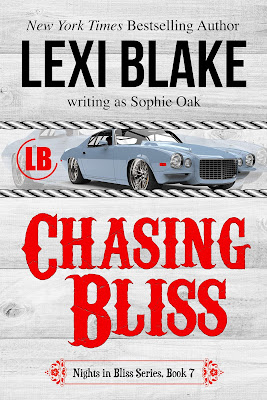 Gemma Wells came to Bliss, Colorado, after a scandal cost her everything. Utterly lost, the disgraced attorney built walls so high that she thinks no one can get through them. She’s given up on love, friendship, and all matters of the heart.

Jesse McCann and Cade Sinclair have floated through life, enjoying the world around them, but never allowing themselves to become a part of it. One look at the pretty attorney and Jesse realizes he’s finally found a reason to stay put. Cade isn’t so sure. He’s crazy about her, but he also knows he doesn’t deserve her.

As they begin to find their way together, a dark secret from Gemma’s past threatens to wreck their futures. Her ex-fiancé is back, bringing danger with him, and their time is running out. Jesse and Cade have to melt this Ice Queen’s heart, or she might not leave Bliss alive.

Review:
Gemma's entire focus was her career as an attorney but she lost everything when she caught her fiancé in bed with another woman and had a very public meltdown. Leaving everything behind she has returned to her mother's hometown, Bliss, in the hope that she can start to rebuild her career in a few months time when the scandal has blown over. She is determined not to stay in Bliss and her defensive walls are doing a great job of keeping the residents at a distance but two guys are determined to change that.

Jesse and Cade have been on the move for years searching for the man who destroyed their foster mother but now they've had their revenge they're starting to feel like Bliss might be the perfect place for them to build a life for themselves. They're both immediately drawn to Gemma and Jesse is ready to dive into a relationship head first, Cade is much more reserved about the idea. Jesse is his brother and he's attracted to Gemma but he blames himself for things that happened in his past and doesn't believe he is good enough to be in a long term relationship.

I love Bliss, I actually wish it was a real place because I would love to move there! Seven books in there are a lot of familiar faces now and it's always great to catch up on the latest gossip and see how everyone is getting along but I've also really enjoyed every single romance in this series. Poor Jesse has his work cut out in this book, Gemma has walls a mile high that she's determined not to let anyone break through while Cade is just looking for excuses to run and Jesse is the one determined to grab hold of them both and bind the three of them together.

As always with this series Chasing Bliss was full of sweet romance, scorching hot sex, amusing banter and funny side characters topped off with an edge of danger and I loved every minute of it.