Review: Back in Bliss - Lexi Blake 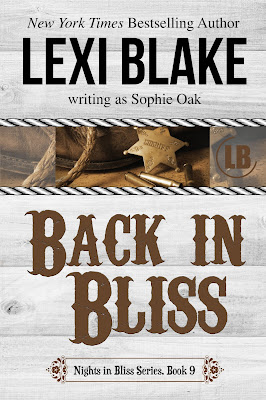 Logan Green is back in Bliss, but only for a few weeks to help out at the sheriff’s office. Everything changes when Seth Stark strolls into town with Georgia Dawson on his arm.

Seth’s arrival is anything but a happy accident. He always dreamed of a big house on the river and a wife he could share with his best friend, Logan. After building a software empire, his only goal has been to make that dream come true. He just needed the perfect woman.

Georgia is still haunted by the dark, troubled man who saved her life. She can’t get Logan out of her head. Her boss brought her to Bliss to help him decorate his new summer home, but when Logan Green walks through the door she discovers Seth has something different in mind.

Seth has a plan for their mutual happily ever after, but he never dreamed that coming home would put all their lives in danger.

Review:
We've been building up to Logan's book ever since we saw him tortured at the hands of the Russian Mob in Found in Bliss. Since then he's been a regular recurring character in both the Nights in Bliss and Texas Sirens series and it's been obvious to everyone that he hasn't been coping at all with what happened to him. He's no longer the happy go lucky young man we first met and instead he's closed off and angry with the world. It's understandable considering everything he went through but it's still been hard to watch.

Georgia and Logan had a connection from the moment they met in Siren Unleashed. She initially came across as a snobby rich girl who looked down on everyone around her but as we got to know her I started to realise that she's actually quite sweet underneath the hostile persona she shows the world. Logan didn't know what to make of her acerbic personality but the spark between them was fierce and I loved watching her rock his world. Logan helped save her life when she was in danger but that didn't stop him pushing her away afterwards. He's lost trust in the world and isn't willing to let anyone close to him.

At the start of Back in Bliss it's been months since Georgia and Logan last spoke. Georgia moved to New York and is working as an assistant to hot billionaire Seth. Little does she know that Seth is Logan's best friend from childhood. He's also a master planner and although he ended up in Georgia's life because he wanted to protect the woman his friend cares about he fell in love with her too and now he's determined to create a family for the three of them the way Logan and Seth always planned as children.

Logan hasn't been back to Bliss since he ran away from his friends and family and moved to Dallas. He's so stuck in his own head that he can't bear the thought of being back in the place where he was tortured and he's basically trying to pretend to himself that Bliss doesn't even exist. It takes a lot of manoeuvring on Seth's part to get Logan back in the town and now he's going to pull out all of the stops to convince both Georgia and Logan to give the three of them a chance at a loving relationship.

While all of the books in both of these series work as stand alone stories I do highly recommend reading at least the books I mentioned above if you want to get the most out of Logan's story. He's such a complex character that you really would be missing out on the full depth of his history if you started here. I really enjoyed seeing him finally start to open up about what happened to him and how it has affected him, it's only with Georgia and Seth's help that he's able to start to come to terms with things and put it all behind him. One of the things I love most about Bliss is all the quirky characters that live there and we get to see all of our favourites here as they welcome Logan and Seth back into the fold and welcome Georgia into their hearts. This is actually a place I'd really love to move to! Back in Bliss was a fitting end to Logan's journey and I'm looking forward to seeing him enjoying his happily ever after in future books.