Review: The Winter of the Witch - Katherine Arden 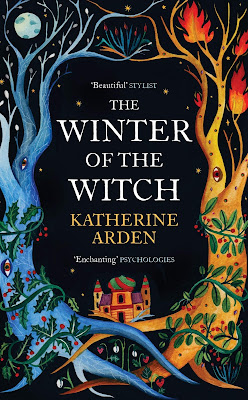 One girl can make a difference...

Moscow has burned nearly to the ground, leaving its people searching for answers - and someone to hold accountable. Vasya finds herself on her own, amid a rabid mob that calls for her death, blaming her witchery for their misfortune.

Then a vengeful demon returns, renewed and stronger than ever, determined to spread chaos in his wake and never be chained again. Enlisting the hateful priest Konstantin as his servant, turmoil plagues the Muscovites and the magical creatures alike, and all find their fates resting on the shoulders of Vasya.

With an uncertain destiny ahead of her, Vasya learns surprising truths of her past as she desperately tries to save Russia, Morozko, and the magical world she treasures. But she may not be able to save them all...

Review:
I put off reading The Winter of the Witch, partly because I didn't want the series to be over but also because I was worried that it wouldn't live up to my high expectations. It's not often you come across a trilogy that is utterly fantastic from beginning to end, especially a debut one, but the Winternight books have been everything I could have hoped for and then some. The world Katherine Arden created is richly woven with both Russian history and folklore, it's like stepping back in time and falling into a fairytale at the same time and I've loved every minute of it.

Things have been getting progressively harder for Vasya as Father Konstantin has set out to turn the world against her. It doesn't surprise me in the slightest that in a world full of magical creatures and monsters the most evil character is an old white dude who uses religion as a weapon to demonise a young girl who has done nothing to deserve it, it's what men have been doing for centuries after all. Really his character was utterly despicable and it makes my blood boil just thinking about him! Anyway, Vasya doesn't give up easily and even when the world has turned it's back on her she won't do the same, especially when her family are in trouble and need her help.

I don't want to say too much about the plot of this final instalment but I will say that Vasya continues to grow as a character. She has come such a long way from the lonely child we first met and is now a confident and powerful young woman who is wise beyond her years. Yes she's made mistakes along the way but she always learns from them and comes out stronger because of it. I like that she's not as reckless as she used to be but she'll always be an action first apologise later kind of character because that's her nature.

This is the perfect series to curl up with on a cold winter's night in front of a fire and with a huge mug of hot chocolate and it's definitely one I'm looking forward to rereading in the future. Katherine Arden is an author to watch out for and her name has been added to my auto-buy list.