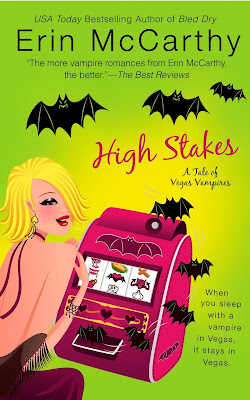 He's a bloodsucking freak of nature. But, unlike other politicians, Ethan Carrick is actually a nice guy. Not to mention a very hot, wealthy, casino-owning vampire. It's an election year for vampires, which means he'll first have to escape his opponent's hit men. Then he'll have to find a suitable First Lady, preferably here in Vegas.

Brittany Baldizzi fits the bill. She's smart, pretty- and sweeter than a glass of diabetic O-Negative. But her protective sister Alexis steps in with a message for Ethan: Bite me. It's then that he realizes it's the sexy, no-nonsense Alexis who raises his stake. And as much as she denies it, Alexis wouldn't mind a romp in the coffin with him. But can a mere mortal, even one who risks her life for him, make a centuries-old, womanizing vampire feel something entirely new?

Review:
Ethan may be the current head of the Vampire Council but he's up for reelection and unless he does something about his image he may not be reelected. So when his advisors recommend he chooses a woman and settle down he reluctantly agrees. Brittany is perfect, she's sweet, kind and she also happens to be a half-vampire, not that she knows it. It's an easy thing for Ethan to use mind control to convince her to move into his casino hotel with him and even if he's not actually attracted to her at least she'll be a popular choice with the rest of the vampires.

When Alexis realises her sister has just up and left her entire life behind to move in with a man she just met she knows something is fishy about the whole thing. She storms into the casino determined to rescue her sister but finds Brittany very reluctant to actually be rescued. Ethan takes one look at Alexis and realises he's chosen the wrong sister but now he's got to figure out a way to convince Alexis to give him a chance.

High Stakes is that kind of light and fluffy read that is perfect for when you want a book that doesn't make you think too hard. If you're looking for something funny that doesn't take itself too seriously then this will probably hit the spot perfectly but I don't think it was quite what I was looking for. I'm all for a silly read when I'm in the right mood but there were times when this crossed from being chuckle out loud funny into ridiculous roll your eyes territory. I get that Brittany was supposed to be ditzy but she was so utterly stupid that it was impossible to believe someone that dumb could survive into adulthood. Seriously that girl would have been run over by a bus while chasing a butterfly in her teens.

Alexis on the other hand is supposed to be the smart sister, she's apparently a lawyer but I had trouble believing that from the way she behaved most of the time. I didn't really feel the chemistry between her and Ethan which meant the insta-love romance was totally lost on me and to be honest I have very little interest in continuing the series. It wasn't all bad and there were some funny moments, particularly in the beginning, but this definitely wouldn't be my top recommendation even for a fluffy bite of brain candy.