Review: The Girl in the Tower - Katherine Arden 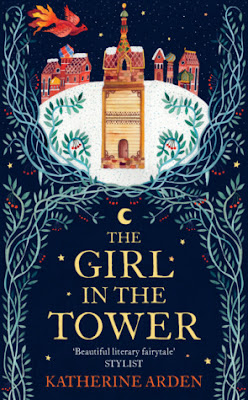 For a young woman in medieval Russia, the choices are stark: marriage or a life in a convent. Vasya will choose a third way: magic...

The court of the Grand Prince of Moscow is plagued by power struggles and rumours of unrest. Meanwhile bandits roam the countryside, burning the villages and kidnapping its daughters. Setting out to defeat the raiders, the Prince and his trusted companion come across a young man riding a magnificent horse.

Only Sasha, a priest with a warrior's training, recognises this 'boy' as his younger sister, thought to be dead or a witch by her village. But when Vasya proves herself in battle, riding with remarkable skill and inexplicable power, Sasha realises he must keep her secret as she may be the only way to save the city from threats both human and fantastical...

Review:
Accused of witchcraft and falsely blamed for the death of her father Vasya has two options open to her, accept an arranged marriage or join a convent. Unsurprisingly neither of these choices hold much appeal to someone as independent as she is so instead Vasya disguises herself as a boy and, with the help of Morozoko, sets out on her own to travel the world and have an adventure. It's all going pretty well until she catches the attention of the Grand Prince and he insists on taking her back to Moscow where two of her older siblings are caught up in her lies and forced to help her continue her deception. And that's where things really start to get complicated.

I absolutely adored The Bear and the Nightingale so I had incredibly high expectations for The Girl in the Tower and thankfully Katherine Arden didn't disappoint. The sequel had everything I loved about the first book and more and I was immediately sucked back into Vasya's world. These stories are just so atmospheric and really make you feel like you've taken a step back in time to medieval Russia and I enjoy exploring that world through Vasya's eyes. She's a great character who is so independent and who wants to live life on her own terms no matter how restricted women's lives were at that time. That reckless streak does get her in trouble on more than one occasion and it also makes things extremely difficult for her siblings but I could understand her desire for more than marriage or life in a convent.

Morozoko continues to be one of my favourite characters and we get to see a lot more of his history in this instalment of the series. I'm enjoying finding out more about his character and I'm not going to lie, I'm totally rooting for him and Vasya to end up together! This series is going from strength to strength and I can't wait to see how it ends in The Winter of the Witch.