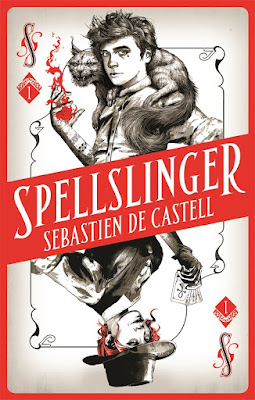 MAGIC IS A CON GAME.

Kellen is moments away from facing his first mage's duel and the start of four trials that will make him a spellcaster. There's just one problem: his magic is gone.

As his sixteenth birthday approaches, Kellen falls back on his cunning in a bid to avoid total disgrace. But when a daring stranger arrives in town, she challenges Kellen to take a different path.

Ferius Parfax is one of the mysterious Argosi - a traveller who lives by her wits and the three decks of cards she carries. She's difficult and unpredictable, but she may be Kellen's only hope...

The first in a rich and compelling fantasy series bursting with tricks, traps and a devious talking squirrel cat.

Review:
Kellan comes from a people with two very different types of citizen, you either pass your magic trials before your sixteenth birthday and become Jan'Tep (a mage) or you fail and become Sha'Tep (basically second class citizens whose only duty is to serve the mages). Kellan comes from a powerful family so there should be no question about whether he'll pass or not, there's just one small problem though, his magic is gone. If Kellan can't find a way to get it back his life will be a misery but when Ferius, a mysterious traveller, passes through his village she makes him question everything and offers him the chance at a different kind of life.

There is a lot to love about Spellslinger, the story was fast paced and had me totally hooked from very early on. It was very easy to connect to Kellan and it felt like I was going though the trials right alongside him, I hurt for him when he failed and I wanted to climb into the book to defend him when he was bullied by other kids his age for his practically nonexistent magic. There was a lot of humour in the story but there were some really dark things too. It was hard to like any of the Jan'Tep and Kellan's parents crossed lines that were incredibly painful to read about so I'd happily set them on fire and watch them burn.

It was only the humour that Ferius brought to the story and the addition of Reichis, the talking squirrel cat, that kept this from being a bit too dark for me but they were such fun characters to read about and I was so invested in Kellan's story that I couldn't put the book down. I have very high hopes for this series and can't wait to see where Kellan's journey takes him next.