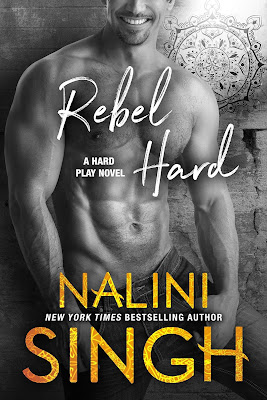 Nayna Sharma agreed to an arranged marriage in the hope it would heal the fractures in her beloved family… only to realize too late that a traditional marriage is her personal nightmare. Panicked, she throws caution to the winds, puts on the tiniest dress she can find, and ends up in the arms of a tall, rough-edged hunk of a man who has abs of steel—and who she manages to mortally insult between one kiss and the next.

Abandoned as a child, then adopted into a loving family, Raj Sen believes in tradition, in continuity. Some might call him stiff and old-fashioned, but he knows what he wants—and it’s a life defined by rules… yet he can’t stop thinking about the infuriating and sexy woman who kissed him in the moonlight then disappeared. When his parents spring an introduction on him, the last woman he expects is her. Beautiful. Maddening. A rulebreaker in the making.

Review:
Nayna has always felt like she has to be the perfect daughter to make up for the disappointment her parents felt when her older sister became a rebel. She's always done what was expected of her and has never wanted to hurt them by pushing her boundaries which is why she has agreed to an arranged marriage. But as she meets one disastrous match after another she starts to question whether she really wants to let herself be trapped in a life of someone else's choosing and her bet friend talks her into attending a party for a night of fun and dancing. The attraction she feels for Raj is instant but their first meeting goes horribly wrong so she is completely shocked when she realises that he's the next match her parents have found for her.

Raj was abandoned as a child and although he was adopted into a loving and supportive family he continues to crave love and security. He believes in tradition and is looking for a woman who will be the centre of his world, someone who will be a loving wife and mother and who would never abandon him. From the minute he meets Nayna he can't stop thinking about her but knowing how much she hates the idea of being forced into marriage he has to choose between his dream and allowing her the freedom to make her own choices.

Nayna and Raj both made an appearance in Cherish Hard as the best friends of Isa and Sailor so I was already excited about this story but it was even better than I had hoped for. They're both such brilliant characters, Nayna is sweet and funny, a little shy but also becoming increasingly brave as she finds her confidence. She loves her family and wants to do right by them but she also desperately wants to get a taste of freedom before she settles down and marries. Raj is a perfect hero, he claims he doesn't believe in romance but he's surprisingly good at the small romantic gestures that every woman longs for. He cares enough about Nayna to want to help her spread her wings and he stands up for her with both her family and his own when it comes to letting her have the chance to pursue her dreams.

The couple have fantastic rapport from the very beginning, they spark off each other and argue but the chemistry is there from the get go and you just know things are going to be explosive when they finally give into temptation. I loved the playful banter between them but also how they were always there for each other when anything went wrong. There is very little drama between them because they talk through their issues and are both willing to make compromises which is something I always appreciate in my romances. I also really loved both of their families, yes they have some issues but they all had a deep bond and clearly loved each other. It was really fun to see the families interact with each other and slowly blend into one big loving, supportive group around our couple.

We all know that Nalini Singh is a queen of paranormal romance but she's also just as good at writing fantastic contemporary romance with heroes you're guaranteed to fall for. T-Rex from Rock Hard has long been my favourite of her contemporary heroes but I think Raj may just have taken first place! Rebel Hard was absolutely perfect, great characters, swoon worthy romance, wonderful family dynamics and some huge and OTT Indian weddings! I'm already excited for the next book in this series.