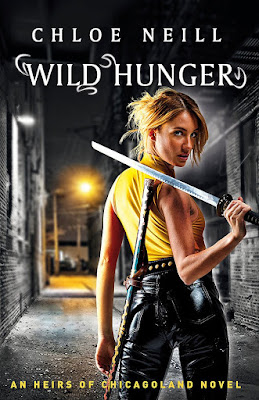 When a grizzly murder threatens to change the paranormal balance of power-and bring an end to years of peace between humans and supernaturals-a new generation must fight for Chicago.

As the only vampire child ever born, some believed Elisa Sullivan had all the luck. But the magic that helped bring her into the world left her with a dark secret. Shifter Connor Keene, the only son of North American Central Pack Apex Gabriel Keene, is the only one she trusts with it. But she's a vampire and the daughter of a Master and a Sentinel, and he's prince of the Pack and its future king.

When the assassination of an ambassador brings old feuds to the fore again, Elisa and Connor must choose between love and family, between honor and obligation, before Chicago disappears forever.

Return to Chicagoland. Meet the family . . .

Review:
Wild Hunger is the first book in Chloe Neill's new Heirs of Chicagoland series, a spin off from her popular Chicagoland Vampires books but set 20 years in the future and staring the next generation. While I do think you could start here if you've not read the previous books you will pick up spoilers for the original series and since I love the books so much I'd definitely recommend starting at the beginning and working up to the spin off.

This story is narrated by Elisa Sullivan, daughter of Merit and Ethan, and the only ever born vampire so Elisa's life has always been watched closely by the vampires of Chicago. As much as she loves her family she has spent the last 4 years living in Paris to get away from the spotlight and the only reason she is returning to Chicago now is to help run security for peace talks between the European vampires that Cadogan and the other Chicago vampires are hosting. Elisa is keeping big secrets from her parents about the magic she was born with and how much she struggles to control it. The only person who knows her secret is her childhood nemesis Connor (wolf shifter and son of Gabriel Keene, Apex of the North American Central Pack) and that's only because he's seen first hand the damage she can do if she loses control. When an assassination threatens to bring the peace talks crashing down it is up to Elisa and Connor to figure out what is really going on but they're going to have to put aside their childhood animosity to do it.

I love it when authors put a fresh spin on much loved series so I was really looking forward to this spin off and it was just as much fun as I hoped it would be. It was nice being able to dive back into a familiar world and see a few of the old faces but it was also great to get to know the next generation and see the story go in a new direction. Elisa was great, it was a little frustrating that she wouldn't ask for help with her magic but I could understand her desire to stand on her own two feet and I liked her independent streak. She has a pretty good relationship with her parents but I was glad that they didn't have a huge role to play because this should be Elisa's story not a continuation of Merit's. Connor was a fun character too and I enjoyed the way they teased each other constantly, they grew up together and at times they still bicker like the children they once were but you can tell there's a nice amount of chemistry bubbling along under the surface so I've got high hopes on the romance front.

Alongside Elisa and Connor we also get to meet Mallory and Catcher's daughter Lulu and I loved the friendship between her and Elisa. Lulu is afraid of becoming addicted to dark magic like her mother did so she's refusing to use her powers at all and instead focuses on her art but she still steps up to help when Elisa needs her. There are plenty of other characters introduced, particularly from the NAC Pack, who I think will have a larger role as the series continues and I'm also very curious to find out whether we'll see more of the vampire house that Elisa had been living with in France.

Wild Hunger was a great start to the series and I'll be preordering the next book just like I did with the original series.