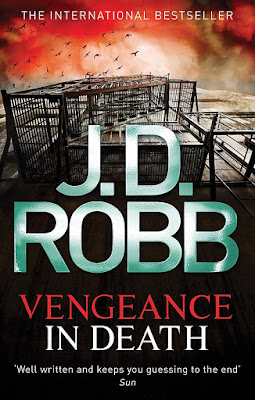 The smell grew riper, thicker. She began to breath through her teeth. She'd smelled violent death too many times to mistake it.

When New York homicide lieutenant Eve Dallas makes the gruesome discovery of a mutilated and dismembered body, the hunt is on to find an evil sadist hell-bent on destruction.

The murderer is close at hand, haunting Eve with cryptic riddles about his next crime - riddles that always leave her with too little, too late.

But when the next butchered body is found, murder gets personal. Eve may be newly married but the honeymoon is well and truly over. New husband Roarke's ugly past is catching up with him, and his secret is the last vital clue in the search for a vengeful killer.

Review:
This series just keeps getting better and better, in Vengeance in Death Eve is faced with a particularly sadistic and brutal killer and it's even more personal than ever when he is going after targets from Roarke's past. Eve has always valued the law more than anything else in her life so it's really interesting to see her in a position where she is uncovering more of the unsavoury side of Roarke's history and she has to decide whether she loves him enough to look past the things he did as a younger man.

I always love learning more about Roarke's background, we've known for a long time that he crossed lines in the past and he will happily cross them again in the future if that's what it takes to protect the people he cares for. Eve is so by the book that that side of him should make her uncomfortable but at the same time she has experienced the worst kind of evil and I think she takes comfort in the fact that whatever Roarke has done it's always been done for a reason. It does irritate me that he's still keeping so many secrets but I'm enjoying seeing them both slowly open up about their backgrounds and it's not like Eve has always been an open book either. Their relationship is definitely only getting stronger over time.

I really enjoyed the addition of McNab's character and hope he's going to be a new cast regular, he's a lot of fun and the banter between him and Peabody was hilarious. I think there's a bit of a spark there but we'll have to wait and see if it turns into something or not. It was also fun to see Summerset in the hot seat when it looks like he could be the murderer, I've never liked the way he treats Eve so it was good to see him sweat knowing that she's the one person who stands a chance at proving his innocence. I hope we'll see him start to be a little nicer to her now but I'm not holding my breath on that one.

I realised recently that even if I read one In Death book a month it's still going to take me about 4 years to catch up with this series (and that's not even counting the extra novellas and short stories available!) but I love these characters so much that I'm going to make a concerted effort to do just that. I'm not very good at binging books one after the other or I could catch up faster but I think one a month is more realistic. We'll see how long I can actually keep it up for but keep your fingers crossed for me!