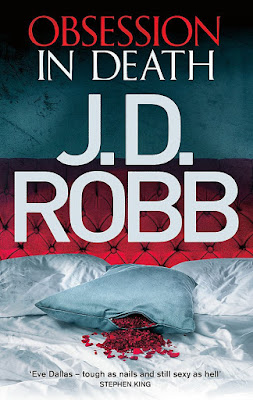 A crisp winter morning in New York. In a luxury apartment, the body of a woman lies stretched out on a huge bed. On the wall above, the killer has left a message in bold black ink: FOR LIEUTENANT EVE DALLAS, WITH GREAT ADMIRATION AND UNDERSTANDING.

Eve Dallas is used to unwanted attention. Famous for her high-profile cases and her marriage to billionaire businessman Roarke, she has learned to deal with intense public scrutiny and media gossip. But now Eve has become the object of a singular and deadly obsession. She has an 'admirer', who just can't stop thinking about her. Who is convinced they have a special bond. Who is planning to kill for her - again and again...

With time against her, Eve is forced to play a delicate - and dangerous - psychological dance. Because the killer is desperate for something Eve can never provide - approval. And once that becomes clear, Eve knows her own life will be at risk - along with those she cares about the most.

Review:
Eve has dealt with a lot of psychopaths in her years as a cop, she's come up against murderers with all kinds of motives, some more understandable than others, but this might be one of the strangest. Somewhere along the way Eve has picked up her very own stalker and that person thinks the best way to connect with Eve and show her how perfect they would be together is by brutally murdering anyone who has ever crossed her in some way. Her stalker is obsessed and it leaves Eve treading a very fine line, if she makes any kind of comment validating the stalker then they'll probably increase their kill rate but if she publicly denounces them then the stalker may turn on Eve and start targeting the people she's closest to. The only option is to try and figure out their identity before more people are hurt but with very few clues to work from it's going to be a difficult task.

Eve absolutely hates attention but thanks to her marriage to the world's hottest bachelor Roarke and the attention she has received for her skill solving high profile cases she's become a bit of a celebrity. We've seen her getting recognised more and more often since the Icove case was made into a movie but what we haven't seen is how many obsessive fans she's picked up along the way. Most of her mail is dealt with directly by the police PR department so even Eve is shocked to discover the amount of people who have been writing to her for years trying to get her attention. It's likely that one of them is now killing people they see as Eve's enemies in her name so she's forced to dig a little deeper into their backgrounds than she really wants to and the results were quite often hilarious.

One of the things I love so much about this series is how it seamlessly blends humour, friendship, romance and so much more around whatever murder investigation Eve is currently working. The side characters are all so real to me now that I just want to step into this world so I can meet them all. The longer the series goes on the more time we're getting to spend with Eve's entire division and it's always great to see what a brilliant leader she is and how much her cops respect her. This case hits particularly close to home because Eve has good reason to suspect that the killer has insider knowledge but with her entire squad willing to put in all the extra time needed they'll stop at nothing to close the case.

It amazes me that 40 books in and I'm still utterly obsessed with this series. I just can't get enough of Eve, Roarke and the rest of the gang.