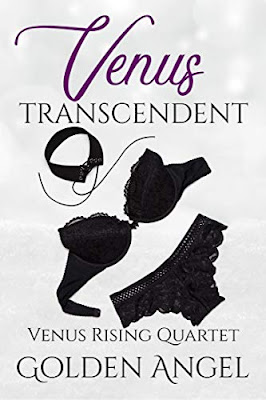 Outed by her ex-boyfriend, Jessica is determined to get comfortable with her unconventional, polyamorous relationship with both Justin and Chris. And that means facing her family and choosing her own happiness, and the happiness of her men, over anyone else’s judgment.

But as the trio approaches their future more united than ever, it’s Liam and Hilary who begin to falter as Liam discovers Hilary has kept him a secret from her own parents. While he’s been falling head-over-heels for his honey-girl, it seems she doesn’t feel quite the same.

Editor’s note: Venus Transcendent is a high-heat romantic adventure that contains elements of MF, MFM, and other extremely mature themes. It is book four in the Venus Rising series and is intended to be read and enjoyed after Venus School, Venus Aspiring, and Venus Desiring. Proceed with caution (or excitement, whichever)!

Review:
In the fourth book of this series we see Jessica start to become more comfortable in her relationship with Justin and Chris. She's still extremely self conscious around strangers but she's starting to realise that it doesn't really matter what people think about them as long as they're happy. She's fed up with her family ignoring the issue though and is going to take matters into her own hands to force them to face the issue. Let's just hope it doesn't backfire on her. Meanwhile Liam is ready to take the next step with Hilary but she's nervous about how quickly their relationship is moving and that's got them both on edge.

All I'm going to say about this is that I was really happy with the progress made on both of these relationships. I've been invested in Jessica, Justin and Chris since the beginning and it's great to see them with such a supportive community around them, they may not have all of the family approval that they'd hoped for but they've created their own family of supportive friends. Not all of Jessica's vanilla friends have abandoned her and they've all been welcomed with open arms by the kink community in Stronghold. I also really love Hilary and Liam, they're a ridiculously cute couple and I think they're pretty perfect together.

I'm definitely looking forward to reading the Stronghold spin off series, we've met so many great side characters and I hope they'll all be getting their own books.