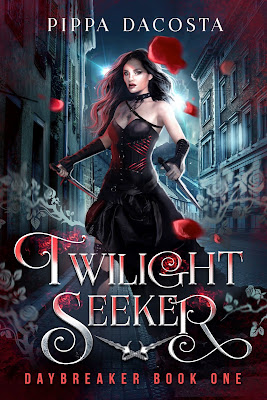 Meet Lynher Aris. Hostess extraordinaire. By night, she entertains the Dark Ones passing through the Night Station: vampires, demons, shifters, and worse. By day, she undermines them all, working with the resistance to unravel their enslavement of the human race.

But Lynher has a dark secret of her own, and with the imminent arrival of Ghost—a vampire overlord few have seen but all fear—she must play her role as the queen of the Night Station to perfection, keeping the resistance and her secret safe, or risk losing everything, including the powerful Night Station itself.

Review:
It's no secret that I'm a Pippa DaCosta fangirl so of course I've been eagerly waiting for Twilight Seeker ever since she first announced it but I'm going to say it here and now that she has completely outdone herself with this one. The story had me hooked from the first page with its brilliant world building and fantastic characters. Nothing is quite what it seems when it comes to the Night Station, it's magical, dangerous and full of secrets. I think we've only started to scratch the surface and I can't wait for the next book so we can dig down a few more layers.

Lynher is a great character, she's a normal human in a world full of demons, vampires and fae who all consider her prey. It is her job to run the Night Station and keep the peace amongst her guests but she's at a physical disadvantage compared to everyone around her so she's walking a very fine line keeping everything balanced. It's all about keeping up appearances and making sure the guests see her as someone to be wary of rather than someone they can walk right over. She's not completely powerless though and again I think we have a lot more to learn about what she's truly capable of.

While juggling the needs of her guests Lynher is also working alongside the human resistance doing everything she can to rescue as many humans as possible from slavery to the vampires and other supernatural races. Throw in characters like Rafe, the incubus who has been attempting to seduce her for as long as she can remember, and Just Jack, a new arrival at the Night Station who is obviously more than he seems, and I have absolutely no idea where this series is going to take us next. We've already had so many twists so while I have a few suspicions about certain people I'm pretty sure Pippa will turn everything on its head all over again in the next book.

Series like this are the reason I love urban fantasy and I'm so happy we only have to wait until July for the second book, Night Scourge, although if Pippa could write a little faster and let me have it sometime next week I definitely would't complain LOL.