Review: The Marquis and I - Ella Quinn 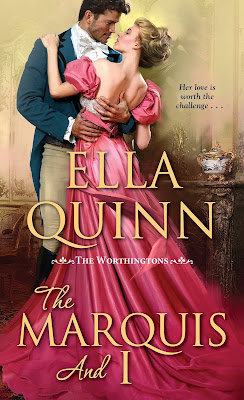 Trouble is no match for a lady of the extended Worthington family--except when it comes in the form of a most irresistible gentleman . . .

Lady Charlotte Carpenter's brother-in-law has put an infamous brothel owner out of business--yet it is Charlotte who suffers the consequences. Abducted by thugs and held at an inn, she is plotting her escape when she's suddenly rescued by a dashing gentleman. Only afterward does she realize she's seen him before--with two courtesans! Unwilling to tarry with such a man, Charlotte makes her second escape. But it is too late to repair her reputation . . .

A known gossip has spied Charlotte's movements, and his report is speeding through the rumor mill. Soon, everyone knows that Charlotte spent the night with Constantine, Marquis of Kenilworth. And everyone agrees the only answer is marriage--including Constantine himself, his overjoyed mother--and his mistress! But Charlotte's abductors aren't finished with her yet. Now Constantine will do anything to protect the spirited woman he loves and win her heart . . .

Review:
When Lady Charlotte's brother-in-law put a dangerous brothel owner out of business nobody expected that she would be the one to pay the consequences. However, when she is abducted from outside her home by two thugs that is exactly what happens. Luckily Charlotte is always calm in a crisis and she is carefully plotting her own escape when a family friend steps in and offers her assistance. Constantine, Marquess of Kenilworth, is a known playboy who has no intention of settling down any time soon no matter how much his mother wants him to. But when a known gossip catches him and Lady Charlotte spending a night together after her rescue her reputation is ruined, no matter how innocent it was. Constantine finds himself drawn to Charlotte's intelligence and her feisty nature and for the first time he starts to wonder if getting married might not be so bad after all.

To be honest it's taken me so long to get around to writing my review for this book that I can't really go into as much depth as I usually would. I do remember really liking Charlotte's character and her determination to marry for love rather than getting stuck with someone just because they're caught in what looks to be a compromising position. I also liked that Charlotte was smart enough to plot her own rescue and that she didn't really need a knight in shining armour to come looking for even though an ally ended up being very welcome in the long run. Constantine was a bit more problematic in the way he treated women in his life but he actually listened to Charlotte's point of view and once he realised the harm he had caused he tried his best to set things right which made it much easier to like him.

I've been really enjoying this series so I'm looking forward to picking up You Never Forget Your First Earl when I'm next in the mood for a historical romance.