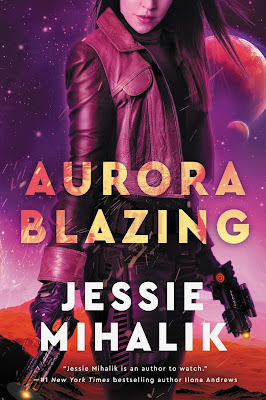 To save her brother and protect her family’s future, a powerful princess must join forces with a dashing man from her past in this thrilling space adventure, the second novel in the Consortium Rebellion trilogy.

As the dutiful daughter of High House von Hasenberg, Bianca set aside her personal feelings and agreed to a political match arranged by her family, only to end up trapped in a loveless, miserable marriage. When her husband unexpectedly dies, Bianca vows never to wed again. Newly independent, she secretly uses her wealth and influence to save other women stuck in dire circumstances. Information is power and Bianca has a network of allies and spies that would be the envy of the ’verse—if anyone knew about it.

When her family’s House is mysteriously attacked, Bianca’s oldest brother, the heir to House von Hasenberg, disappears. Fearful for her brother’s life, the headstrong Bianca defies her father and leaves Earth to save him. Ian Bishop, the director of House von Hasenberg security—and Bianca’s first love—is ordered to find and retrieve the rebellious woman.

Ian is the last man Bianca wants to see. To evade capture, she leads him on a merry chase across the universe. But when their paths finally collide, she knows she must persuade him to help her. Bianca will do anything to save her sibling, even if it means spending time alone on a small ship with the handsome, infuriating man who once broke her heart.

As the search takes them deep into rival House Rockhurst territory, Bianca must decide if she can trust Ian with the one piece of information that could destroy her completely . . .

Review:
As the oldest daughter of House von Hasenberg Bianca did her duty and married a man she didn't love to help her father build political alliances. It wasn't a happy marriage, especially since her husband was a mad scientist who liked to experiment on her, so after she is unexpectedly widowed Bianca vows to never marry again. Instead she uses her newfound independence, and her own secret network of spies, to help other women trapped in difficult situations.

When the House is attacked and her oldest brother Ferdinand is taken prisoner, Bianca decides to put her network to even better use as she sets out to bring him home. Her father sends the House head of security to bring Bianca back home but she will do whatever it takes to convince Ian that the best chance of bringing Ferdinand home alive is by working together to find him.

I have to admit I was a little disappointed when I realised that each book in this series was about a different couple just because I liked Ada and Loch so much in the first book and wanted to spend more time with them. The change in narrators ended up working really well though and I found Bianca was just as enjoyable to read about as her sister. Bianca is older than Ada and sees herself as the protector of her siblings, she has always gone along with her father's wishes so that the younger ones don't have to but when Ferdinand is in danger she can't just sit back and let someone else take control of his rescue. She has unique resources that Ian and the rest of the security team don't have access to and nothing is going to stop her from using them.

Bianca and Ian have a difficult relationship because they both have feelings for each other that they know they can't act on for various reasons. There is no way her father would ever have approved a match between them but that never stopped Bianca from dreaming, right up until her wedding. Now she has sworn off of relationships but it doesn't make it any easier to hide her attraction to Ian when they're working so closely together. I loved the slow build romance between them and the way Bianca was so brave to open her heart again after being betrayed so badly by her husband. Both Bianca and Ian have plenty of secrets but they're really well matched and I enjoyed watching them work together.

This story had just as much action as the first book and we learn a bit more about the rivalry and building war between House von Hassenberg and House Rockhurst. Revelations towards the end of the book left me desperately waiting for the final book in the trilogy, Chaos Reigning, so I'm glad I don't have to wait too much longer to get hold of a copy.