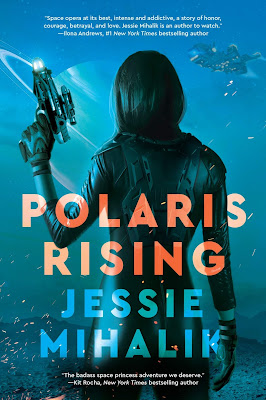 A space princess on the run and a notorious outlaw soldier become unlikely allies in this imaginative, sexy space opera adventure—the first in an exciting science fiction trilogy.

In the far distant future, the universe is officially ruled by the Royal Consortium, but the High Councillors, the heads of the three High Houses, wield the true power. As the fifth of six children, Ada von Hasenberg has no authority; her only value to her High House is as a pawn in a political marriage. When her father arranges for her to wed a noble from House Rockhurst, a man she neither wants nor loves, Ada seizes control of her own destiny. The spirited princess flees before the betrothal ceremony and disappears among the stars.

Ada eluded her father’s forces for two years, but now her luck has run out. To ensure she cannot escape again, the fiery princess is thrown into a prison cell with Marcus Loch. Known as the Devil of Fornax Zero, Loch is rumored to have killed his entire chain of command during the Fornax Rebellion, and the Consortium wants his head.

When the ship returning them to Earth is attacked by a battle cruiser from rival House Rockhurst, Ada realizes that if her jilted fiancé captures her, she’ll become a political prisoner and a liability to her House. Her only hope is to strike a deal with the dangerous fugitive: a fortune if he helps her escape.

But when you make a deal with an irresistibly attractive Devil, you may lose more than you bargained for . . .

Review:
As the fifth of six children Ada's main purpose in life was always to marry into one of the other prominent houses so that her father, the head of the von Hasenberg, could place a spy in an enemy camp. Her father doesn't care that it would be a loveless marriage and that she'd be miserable, he just sees it as her duty to her family. Ada isn't quite so willing to go along with his plans though and she's spent the last couple of years on the run, hiding as a mercenary and taking whatever jobs she can just to survive.

Now her father has lost patience with her though and placing a huge bounty on her head left her vulnerable to any lowlife who just wants to collect the cash. Taken prisoner she is thrown in a cell with another notorious and high value prisoner Marcus Loch. Ada will do whatever it takes to escape before she's taken back to her father and if that means allying herself with another prisoner then that's what she'll do. She doesn't trust Loch but neither of them stand a chance of escaping alone so they'll have to work together in the short term at least.

Polaris Rising was such a fun read and I enjoyed every minute of it. It was the perfect blend of sci-fi world building and romance with plenty of action, great characters and hot chemistry. Ada is a brilliant character who is both smart and fierce, she has no intention of getting caught by her father or her unwanted fiancé and she will do whatever it takes to figure out why House Rockhurst are so eager for the marriage to go through. Loch is the kind of mysterious alpha who I find it very hard to resist, it's obvious he has secrets and I enjoyed unravelling some of the layers to find out more about his past. Ada and Loch fit together really well, they balance each other out as a couple and even when they have a big misunderstanding they're both adult enough to talk things through rather than just act without thinking.

This is a romance so that is a large focus of the story but there was plenty of other things going on too. The romance is fairly slow build and completely believable and the action and mystery kept me on my toes while I was reading. I'd be very happy to read more books with Ada and Loch as the main characters but I'm also excited that the next book stars Ada's sister Bianca. The next book is definitely at the top of my wish list and Jessie Mihalik is an author to watch out for.