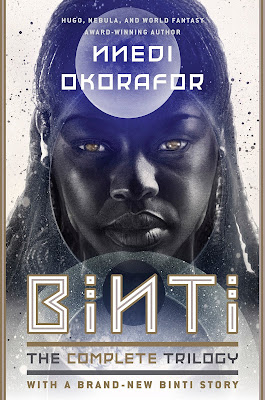 Includes a brand-new Binti story!
Collected for the first time in an omnibus edition, the Hugo- and Nebula-award-winning Binti trilogy, the story of one extraordinary girl's journey from her home to distant Oomza University.

In her Hugo- and Nebula-winning novella, Nnedi Okorafor introduced us to Binti, a young Himba girl with the chance of a lifetime: to attend the prestigious Oomza University. Despite her family's concerns, Binti's talent for mathematics and her aptitude with astrolabes make her a prime candidate to undertake this interstellar journey.

But everything changes when the jellyfish-like Medusae attack Binti's spaceship, leaving her the only survivor. Now, Binti must fend for herself, alone on a ship full of the beings who murdered her crew, with five days until she reaches her destination.

There is more to the history of the Medusae--and their war with the Khoush--than first meets the eye. If Binti is to survive this voyage and save the inhabitants of the unsuspecting planet that houses Oomza Uni, it will take all of her knowledge and talents to broker the peace.

Review:
Binti: The Complete Trilogy is a bind up containing all three novellas (Binti, Home and The Night Masquerade) in Nnedi Okorafor's award winning Binti trilogy plus an extra short story called Sacred Fire. I'll review each of the stories separately but I've really enjoyed the whole series so it's definitely one I'm happy to recommend! 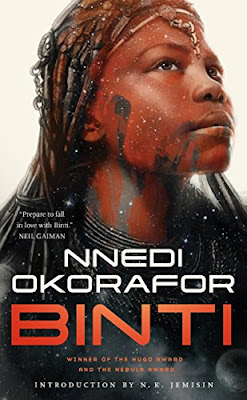 Binti is a member of the Himba tribe, a group of people who live in a dessert region of their planet and who have a strong connection to each other and their home. She is the first member of the tribe to be offered a place at the galaxy famous Oomza University, somewhere only the very best of the best are invited to study. It goes against all traditions for Binti to leave her homeland and it's something her family would never allow so she has to sneak off in the middle of the night to catch the spaceship on time. When the ship comes under attack by a jellyfish like alien species Binti is the only one on board who has a chance to communicate with the Meduse and try to broker peace before they arrive at the university.

I thought this story was a great introduction to the series although I really would have loved for it to be longer! I loved Binit's character, she's smart and resourceful but also nervous as she leaves her homeland for the first time and you could feel her bewilderment as she first arrived in a big city which was completely alien to her. The story shows all to well how much prejudice humans can feel towards people who are a little bit different to themselves but I liked the way Binti handled that and was glad to see her start to make friends with the other students on board the ship.

Where it fell down a little for me was after the Meduse came on board and slaughtered nearly everyone on board including Binti's new friends. I was really curious about the Meduse's anatomy & could easily picture them almost floating around the ship but it was a little hard to believe she was able to talk them out of their plans to destroy the university so quickly. I think I just needed a little bit more time to see Binti and Okwu go from enemies to allies, that would have made the turnaround feel a bit more believable and realistic.

I am really curious to see where the story goes from here though and I've got very high hopes for the series as a whole.

This short story is set several weeks after Binti and Okwu arrive at the Oomza University. Binti is struggling to come to terms with everything that happened on the journey and is quite obviously, and very understandably, suffering from PTSD and flashbacks. She had dreamed of attending the university but nothing is quite what she expected. She's treated as an outsider even by the other humans because they consider the Himba people to be lesser than themselves, people don't understand her culture and they also blame her for surviving the massacre on the ship when many of their friends and family members were killed.

It's not all bad though, Binti is enjoying her studies and she's even starting to make a couple of friends so there is hope for her future. This was an enjoyable short and definitely left me looking forward to continuing the series. 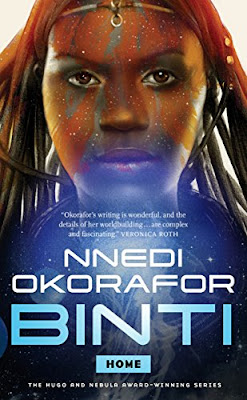 Binti and Okwu have been studying at the Oomza University for a year now and it's time for Binti to return home and face her family before continuing her studies. She is considered a hero by some for preventing the meduse from attacking the university but others consider her a traitor for supposedly aligning with them against the humans. Her family haven't forgiven her for leaving them and travelling so far from home either so it's set to be a difficult reunion.

I have to admit I was surprised and a little disappointed when I realised that most of this story wouldn't be set at the university because I was so interested in all the different alien creatures that attend. But then we get to travel back to Binti's homeland and find out all about her family's tribal traditions and I was so swept up in the story that I didn't have time to be upset.

This isn't an easy journey for Binti, her family are resentful that she left and to be honest I kind of hated most of her siblings for the way they treated her when she returned but I loved Binti for standing up for what she wanted and being brave enough to choose her own path in life. It was hard for her to come home and realise how much she has changed while the people she left behind carried on in the same familiar paths, she no longer feels like she fits in with her family which was heartbreaking, especially since she doesn't feel much like she fits in at university either.

She does find out a lot about her father's side of the family though which I absolutely loved, they are a nomad tribe who were much more open to change and much happier to welcome Binti into their circle. She had to face some difficult truths about the fact that while people are prejudiced against her and the Himba tribe, the Himba, herself included, also have their own prejudices against the nomadic dessert tribes even though they are blood relations. I felt like Binti really grew a lot emotionally in this instalment and I'm excited to see where her journey takes her next. 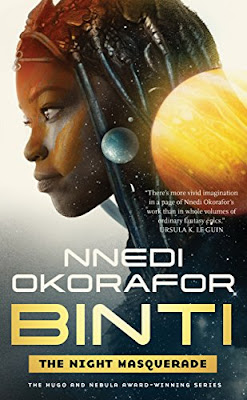 As much as I've enjoyed this series overall I have to admit that The Night Masquerade wasn't my favourite instalment and I was left feeling a little disappointed about the way things ended.

The previous instalment ended when Binti realised that Okwu and her family were under attack and this one kicks off with her desperate journey across the desert with the help of her guide Mwinyi. Binti is unable to contact anyone she left behind but she knows something awful has happened and that the Khoush have broken the treaty so it's a race against time for her to get home in time to help the people she cares about.

It's hard to go into too much detail but what Binti uncovers is a shocking betrayal that should have left her devastated. I think one of the problems I had with this story was how quickly she seemed to brush everything off and start trying to rebuild the peace between the Khoush and the Meduse. I get that she was trying to prevent her village being destroyed in an all out war between the other two groups but considering everything the Khoush had done at that point I would have expected her to be a little less invested in the peace process. I guess she's a better woman than I am though!

Really my main issue with this novella was how unresolved so many things were, we get some answers but a lot of things are left open ended and this really didn't feel like the end of a series. If there was another book to come I wouldn't have been so disappointed by that but as the end of a trilogy it felt unsatisfying. Especially the way the author played with our emotions only to magically fix things moments later. I think after loving the first two stories so much I had high expectations for a grand finale and it just wasn't as epic as I hoped.

Hardback bind up of the complete series / or the three novellas are also available separately: