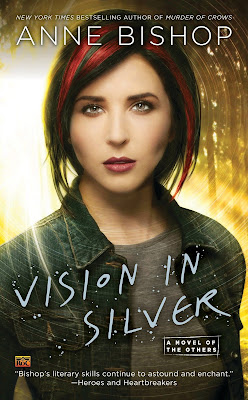 New York Times bestselling author Anne Bishop transports readers to a "stunningly original" world of magic and political unrest - where the only chance at peace requires a deadly price....

The Others freed the blood prophets to protect them from exploitation, but their actions had dire consequences. Now the fragile seers are in greater danger than ever before. In desperate need of answers, Simon Wolfgard, a shape-shifter leader among the Others, has no choice but to enlist blood prophet Meg Corbyn's help, regardless of the risks she faces by aiding him.

Meg knows each slice of her blade tempts death. But Others and humans alike need answers, and her visions might be Simon's only hope of ending the conflict.

For the shadows of war are deepening across the Atlantik, and the battle is threatening to break out right on Meg and Simon's doorstep....

Review:
The terra indigene may have saved the blood prophets and destroyed the compounds where they had been held captive and exploited but it turns out that was the easy part. The hard part is going to be finding a way to help the girls survive life on the outside, away from their strictly regimented routines and experienced handlers. The Others and the intuits are doing their best to make them comfortable in their new homes but they're finding so many changes hard to cope with and the only person who has a chance of helping them survive is Meg.

Meanwhile the animosity between humans and the Others is increasing thanks to the HFL (Humans First and Last) movement. Nicholas Scratch is the perfect spokesperson for the group, full of charm and playing on people's fears and prejudices to stir up hatred and bigotry. Not all humans agree with the HFL but unless Simon can figure out a way to reduce tensions between the two groups all humans will pay the price. They have no idea what kind of trouble they are stirring but they're about to get a few reminders.

I'm still totally hooked on this series and haven't really come up for air since I started Written in Red a few days ago. I'm fascinated by this world that Anne Bishop has created and I love so many of these characters. It's been really interesting to see the changes that have come over the Lakeside Courtyard since Meg walked into their lives, the small human pack they've accepted for her is gradually growing and the Others who live there are starting to see how interesting life can be with cooperative humans around. Of course the more trouble that HFL stir up around the whole of Thaisia the greater the danger is but Simon is still trying to find a way forward that allows both groups to live side by side.

I've loved seeing Meg start to make friends and build a life for herself but now she's facing her biggest challenge yet and struggling to find answers that could help the rest of the blood prophets. She has friends around her now though and I really like the camaraderie between the human pack but also the Others who have taken her under their wings. One of my favourite things is the friendship between Meg and Simon though, it's so easy for everyone else to see that they're falling in love but Meg has no experience and doesn't understand while Simon isn't willing to admit his feelings because Others mating with humans just isn't the done thing. I really want to see some payoff between these two soon but so far I'm enjoying the slowburn. We're starting to see more of police officers like Monty and Burke and how the way they act is having a huge impact on relationships between humans and the Others too. Monty has a lot going on in this book and honestly it was something I was really hoping would happen so I did cheer a little when a certain new character showed up.

I finished this book at 6am this morning so that should give you an idea of how much I was enjoying it, especially if I add that I managed to grab three hours of sleep before I was awake again and making a start on Marked in Flesh. I honestly can't remember the last time a series grabbed me this hard but right now I'm loving every minute of it.