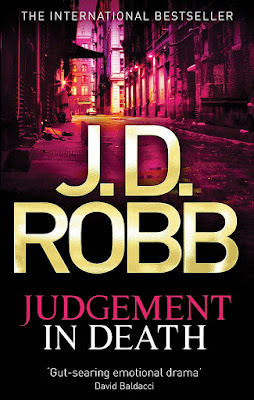 She stood in Purgatory and studied death. The blood and gore of it, the ferocity of its glee.

An elite drinking club - Purgatory - where the sinful commit more sin. And where a young, undercover cop has met a grisly end: bludgeoned to death, his body scattered with thirty silver pieces. A message is being sent to a shocked police force. And homicide lieutenant Eve Dallas is furious.

But things are not as they seem. Helped by her billionaire husband's extensive hacking skills, Eve identifies a sickening web of corruption that has taken over the entire police department. Dangerous secrets are being hidden and time is running out.

An old enemy and an old flame, a criminal driven mad by drugs and a killer acting on revenge - as the elements become twisted and confused in Eve's mind, she must rely on her instincts as never before.

Review:
This instalment of the In Death series sees Eve trying to hunt down a cop killer, someone is targeting policemen and they all seem to be linked to a failed case against notorious gangster Max Ricker, someone who also happens to be an ex-associate of Roarke's. The deeper Eve digs the more trouble she finds, it appears that the policemen who were murdered may have been dirty but what remains to be seen is how deep the corruption goes and who the next target might be. Eve needs to stop a killer but she's also determined to sniff out anyone who has been on the take and she wants to put Ricker in prison where he belongs. She's going to have to work fast because Ricker has a grudge against Roarke and he now thinks targeting Eve is the perfect way to get back at his old associate.

The second a member of the police is murdered the entire police force pulls together to get justice for one of their own. The heat is on to solve the case quickly but as Eve starts investigating the officers involved she gets more than a few backs up from people unwilling to believe the victims were dirty. Now finds herself in the impossible situation of investigating colleagues, people who should uphold the law not break it, and it's an extremely uncomfortable situation to be in. Roarke's connection to her main suspect makes things even more complicated but that's something she should be getting used to now, he has his fingers in so many pies it's hard to find a case that doesn't touch him in some way or another.

Their relationship has always been really strong but they're both pretty messed up in their own ways and this book is the first time we see them at odds with each other. They have a pretty bad fight that leaves them both reeling and it was quite a shock to see such a distance between them. It was easy to see where they were both coming from though and I think they both learned a lot about themselves and each other thanks to the fight. The making up was pretty epic too so that was worth falling out for! I think they're a fantastic couple so I'm glad that they're still growing and evolving as the series continues. I'm still totally loving this series and I'm planning to dive into the next book as soon as possible, it's a good job I order several books at a time because I can't seem to stop binging on them lately!