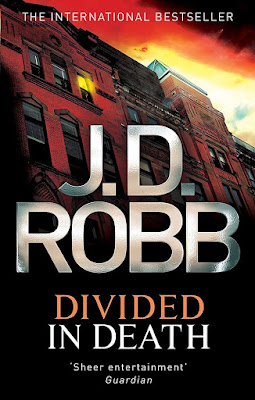 She screamed once. Something, someone slipped out of the shadows. She collapsed beside the dead who had betrayed her.

Approaching her cheating husband and lying best friend, Reva Ewing is bent on revenge. But somebody got there first. In a desperate fight to prove her innocence Reva calls on the only man she can trust: Roarke, the roguish husband of Lieutenant Eve Dallas.

But the truth is messy: a complex artist, a long-lost brother, a deadly computer worm designed by terrorists - Eve and Roarke are dealing with a deeply volatile case where no one trusts a soul and everyone has their eye on a prize.

Review:
When Reva goes searching for her cheating husband and her supposed best friend she is in a rage having just discovered their affair and she's definitely looking for revenge. Finding them in bed together isn't a surprise considering what she knows but the last thing she was expecting was for them both to have been brutally murdered. Things get even worse for her when it becomes clear that someone has set her up as the fall guy to take the wrap for the murders. Luckily Reva works for Roarke and he believes she is innocent. He also happens to be married to the best homicide detective in the city and now it's just up to Eve to figure out who the real guilty party is and prove Reva's innocence.

If you've been following my blog for long (or are friends with me on Goodreads) then you'll already know that I've become completely addicted to the In Death series over the last few months. I just can't seem to get enough of these books and I'm so impressed that each of Eve's murder investigations has been totally different. I never get bored watching her build a case because these books are always so incredibly well written.

I love Eve and Roarke as a couple, they've come such a long way since they first met and they have an incredibly bond. This case brings up some information about Eve's past though and the devastating revelations have them completely at odds with each other. Roarke is mad as hell and ready to commit murder himself after his discovery and to be honest I can't say I blame him. If I was in his position I would feel exactly the same way! However, at the same time I was quite angry with him for the way he reacted to Eve, she is the one who suffered this trauma so even though I understood his urge to get revenge on her behalf the fact of the matter is Eve would be the one to suffer again if he did it. She'd never get over the guilt and she would spend her whole life worrying about him getting caught. He was adding to her trauma with his behaviour and this was the first time I actually wanted to smack some sense into him. Roarke is normally the most intuitive one in their relationship but his anger got the better of him here and it made things rocky for a while.

I actually think I like Roarke even more now though, he can sometimes be a little too perfect but his reactions here were raw and put him totally on edge. I think their relationship is stronger than ever now they've dealt with this issue and I'm glad the arguments weren't left to fester for too long. Of course you also have all the usual sidekicks in this book who help keep the mood lighter, Peabody and McNab, Feeny and a rather hormonal and emotional Mavis too. I really like the whole team and it was interesting to see Roarke's interactions with members of his own staff too. Divided in Death was another great instalment in the series and as always it left me desperate for more.