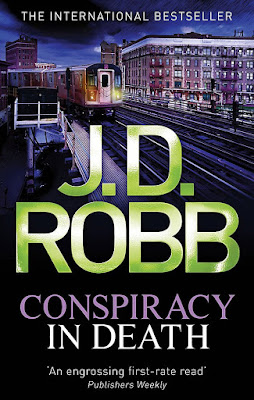 Eve Dallas must stray into the bowels of New York City when she is called to a street sleeper's homicide. All expectations go out the window when she discovers a laser-perfect hole where his heart used to be - the work of a highly skilled surgeon.

Research reveals that similar deaths have been occurring across America and Europe, but all her efforts to work out why are confused by the fact that the organs are always faulty. As she digs further and the medical community shuts against her, Eve's problems become much worse as an internal investigation leaves her suspended from action and fighting to retain her fragile sense of identity. Eve and those loyal to her must go to even greater lengths as they get closer to the mastermind killer and the stakes are raised.

Review:
Eve’s latest case revolves around someone who is illegally harvesting organs from homeless people and killing them in the process. Eve is the first person to link the killer to similar crimes all around the world but now she’s got to work fast before even more people die. Her job is never easy but a run in with another officer, Bowers, just makes things even more complicated. Bowers is a bad cop but she’s one with a big mouth and she’s set her sights on making Eve’s life a misery. All Eve wants to do is focus on solving her case but with Bowers making multiple unfounded complaints about her she finds her reputation on the line and her job at risk.

Conspiracy in Death was a brilliant instalment to the In Death series, not only do you have the action of Eve’s hunt for a serial killer but you also have her coming under attack in her professional life thanks to Bowers. Everyone knows Bowers is a troublemaker but unfortunately, she’s very good at making waves and Eve’s bosses have to follow procedure now that official complaints have been made. Eve’s entire self-worth is tied up in her knowing that she’s brilliant at her job, it’s the one thing that she has always focused on and by protecting others she feels like she is doing something positive with her life. It was painful to see how badly shaken she is when her job is at risk, we really get to see Eve at her most vulnerable here and it hurt to see her brought so low by someone so awful.

On the other hand, Eve being in such an impossible situation really gave her friends a chance to rally around her and show her how much they care which was fantastic. Of course, Roarke is always her number one supporter but characters like Peabody, Feeney, Mavis, Mira and so many others went out of their way to show Eve that they had her back and would never let Bowers win. I loved all the supportive friendships that were showcased here and they gave Eve the safety net she so desperately needed. Roarke is as perfect as ever and the relationship development between him and Eve is the main reason I love this series as much as I do so it’s great to see that Eve is finally starting to be more open with him about how she feels. They really are a brilliant couple and I’m glad I have so many more books to devour before I’m caught up with the series!