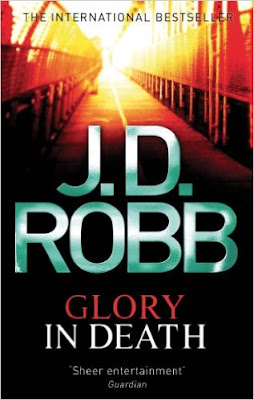 The dead were her business. She lived with them, worked with them, studied them. She dreamed of them. Murder no longer shocked, but it continued to repel.

The first victim is found lying on a sidewalk in the rain. The second is murdered in her own apartment building. Both have had their throats slashed.

New York City homicide lieutenant Eve Dallas has no problem finding connections between the two crimes. Both women were beautiful and successful; their glamorous lives and loves the talk of the city. And their intimate relations with powerful men provide Eve with a long list of suspects - including her own lover, Roarke.

As a woman, Eve is compelled to trust the man who shares her bed. But as a cop, it's her job to follow every lead, to explore every secret passion, no matter how dark. Or how dangerous.

Review:
I'm so glad that I finally bit the bullet and started this series, I enjoyed the first book but I can already see the improvement as I read Glory in Death so I have incredibly high hopes for how wonderful it will be by the time I catch up with the latest releases.

I'm not sure how much time has past since the events in book one but Eve has healed from her injuries and her relationship with Roarke has grown closer than ever so I'm assuming it's at least weeks if not months later. Roarke is obviously crazy about her and he's willing to put his heart on the line and tell her how much he cares but Eve is still holding herself back and trying to keep him at a distance. She's still learning to trust in his feelings for her and she's definitely scared to admit how important he is to her, even to herself. I'll admit Eve's distance can be a little frustrating at times but it was totally understandable considering everything she has been through and I'm glad that their relationship development still feels realistic. They fell in love quickly so they still have to work out how to be a couple but they both seem willing to put the effort in. Roarke pushes Eve to admit her feelings but I never feel like he makes her go faster than she wants. He respects her needs and I think she needs someone who will keep pushing or she'd just stagnate in her comfort zone forever.

While we're on the subject of Roarke he is totally my kind of guy and he's already close to the top of my list of favourite top book boyfriends along with the likes of Curran and Barrons. He's what you want in an alpha hero, he's commanding, attentive, attractive and he loves Eve unconditionally. It doesn't hurt that he's a billionaire (and that I want to move into his library!) but I'd settle for the hot sex on tap LOL. Roarke and Eve both have careers that keep them very busy but he goes out of his way to make sure they have time together and I love that he puts her first over his business interests. The things that rang alarm bells about him in the first book seemed to have vanished in this one (or perhaps I'm blinded by those little love hearts in my eyes!) but he's still very mysterious and I can't wait to dig deeper and uncover all his secrets.

I know I've mainly focused on the relationship (you'd be forgiven for thinking I'm reviewing a romance novel rather than a futuristic romantic suspense) but Eve's job as a detective does play a major role in these books and her latest case involves the murder of two high profile female victims. These women were smart and successful although they had very different career paths and it's up to Eve to try and find out what links them and find their killer. The futuristic setting is great and I'm really enjoying seeing all the different technology J.D. Robb has included in the series (I definitely want a self driving car please!). She also created an interesting murder mystery that kept me guessing all the way through and surprised me at the end (although I should probably mention that I'm the world's worst at guessing who the bad guys are). If I'm this excited about a series after just two books I just can't wait to see how much I'm fangirling after the next forty. It'll take me a while to get through them all but I'll be sure to update you as I do.