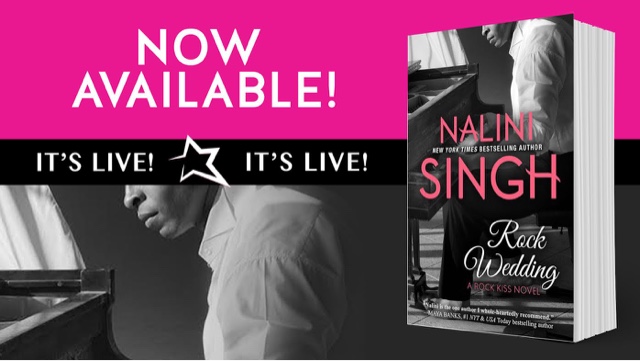 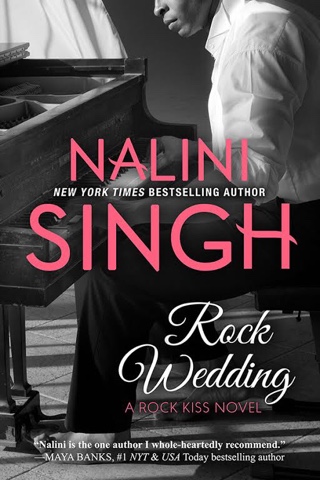 After a lifetime of longing for a real family, Sarah Smith thought she’d finally found her home with rock star Abe Bellamy, even if she knew Abe didn’t love her the way she loved him. But their brief relationship, filled with tragedy and heartache, nearly destroyed her. Alone, emotions in turmoil, and already shaky self-esteem shattered, Sarah struggles to pick up the pieces in the wake of their divorce.

Abe knows he’s to blame for the end of his marriage. Caught in a web of painful memories, he pushed away the best thing in his life – the sexy, smart woman he adores – breaking them both in the process. Then fate throws him a second chance to get things right, to prove to Sarah that she means everything to him. Abe desperately wants that second chance at love…even if he knows he doesn’t deserve it.

But can he convince Sarah – now strong and independent without him – to risk her wounded heart one more time? 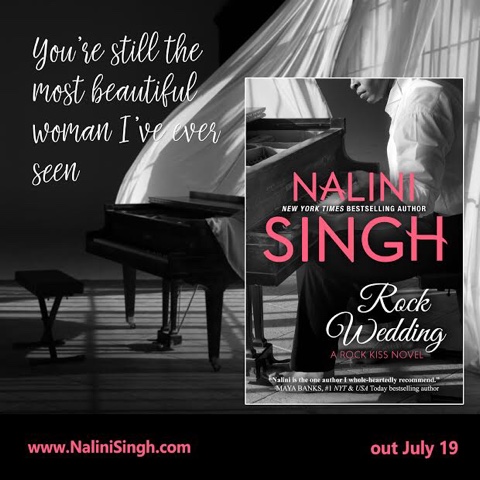 Excerpt from ROCK WEDDING by
Nalini Singh
Plowing his gloved fists into the punching bag in front of him on the morning of the fourth day, Abe blocked out the other sounds in the gym and attempted to lose himself in the rhythm of the mindless action. It worked for about a minute before his mind filled with Sarah again. Her shy smile when he gave her a compliment. The way she’d sit curled up under his arm and read to him on lazy summer days.
Hard on the heels of that memory came one of him throwing her books in the pool in a drug-fueled rage. She’d been sobbing as she tried to save them.
“Fucking bastard,” Abe muttered, talking to his past self. He punched the bag so hard that it threatened to swing back right into his face. He didn’t care. He deserved to have his face beaten in.
Ripping off his gloves afterward, he showered, then went straight to a bookshop.
It was too little too late, but now that he’d remembered his asshole behavior, he couldn’t just leave it. Ball cap pulled low, he wandered the aisles… then realized most people here didn’t care who he was; they were more interested in the volumes that lined the shelves. He spent an hour inside the murmuring quiet of the store, searching for the titles he remembered seeing on their bedside table. She’d definitely read him Jane Austen.
He couldn’t remember which one though, so he bought the entire set.
And there was this one romance novel she loved and had read over and over again. He’d teased her it would fall apart in her hands one day. She’d just smiled and read him a paragraph that she’d told him was part of her favorite scene. What the hell had it been? Yes, that was it. In the end, it turned out the store didn’t have that book in stock, so he bought her a bunch of new releases featuring people with dogs or puppies on the covers. He definitely remembered seeing covers like that in their home.
After spotting it in a display, he added in a nonfiction book about a woman who’d set up her own company while nearly flat broke and who was now a millionaire. At the counter, he paid extra to have the books wrapped up and packaged.
He’d called his car service earlier; the driver shot him a funny look when he put the package in the passenger seat and gave him Sarah’s address. “I’m a courier now?” the stocky middle-aged man asked, having worked long enough for Schoolboy Choir that he was a friend. They’d all missed his calm demeanor and total trustworthiness when he broke his leg recently and had been out for a while.
“Best in the business,” Abe responded.
The other man snorted. “I’ll get it to her now.”
Blowing out a breath after the gleaming black town car pulled away, Abe went to where he’d parked his SUV and got in. He didn’t want to go home to his empty house, but he didn’t want to barge in on his friends either. David and Thea, Noah and Kit, they needed time alone. As for Molly and Fox, while the newlyweds were back home after a short wedding trip, having postponed their honeymoon until later in the year, Abe wasn’t about to bust up their love nest.
Gabriel and Charlotte probably wouldn’t have minded the company since they’d been doing the sightseeing thing, but the other couple had flown back to New Zealand twenty-four hours earlier—after inviting all of them to their own wedding.
His phone buzzed right then.
Picking it up, he saw a message from Fox. Molly and I are at that Thai place with the noodles you like. We saved you a seat if you want to join us for lunch.
Damn, he loved his bandmates. On my way, he messaged back.
Starting the engine, he tried not to obsess over if Sarah would call him after receiving his long overdue gift. Hell, he’d be content with her throwing the books at his head. All he wanted was for her to talk to him, to let him show her he wasn’t that guy anymore, the one who’d destroyed them both. 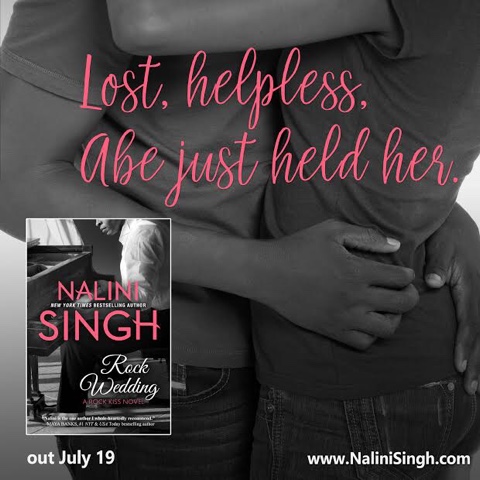 Sarah sat on the floor of her living room, books spread out all around her.
Having worked nonstop for days, she’d given herself the afternoon off. First, she’d gone to see her son. The anniversary had rolled around again, and though she hurt, this month wasn’t one of the bad ones. She’d talked to him, told him about her day, left him with a kiss.
Her plan for the rest of the day had been to get into her pj’s and curl up on the couch with Flossie to binge-watch a favorite television series. Then had come the buzz at the gate that made her heart thunder and her skin flush… and the delivery of a most unexpected package.
I hope you’re doing okay today. Say hi to Aaron for me. I’m sorry I threw your books in the pool. I was a dick. – Abe
Sarah stared at the note card again, still not certain she was reading it right. The first two lines, they turned her throat thick, but the rest… He’d been so high that day that she’d have bet her business he had no memory of the ugly incident. Sarah had never forgotten it: she could still feel the wrenching ache of the sobs that had overwhelmed her as she tried futilely to fish out books that had been well and truly drenched.
Abe, meanwhile, had moved on to throwing the pool furniture into the shimmering blue water.
Her fingers trembled as she picked up a leather-bound copy of Jane Austen’s Persuasion. It matched the other Austen novels he’d sent her, the set a lovely reissue packaged for collectors. Beside the fancy collector’s editions lay cheerful paperbacks with laughing couples and/or dogs on the covers.
She stifled a wet laugh. He’d clearly chosen those at random, but it was cute that he’d remembered she liked romances with animals in them. Half the time when she’d read to him or talked to him about her favorites, she’d thought he was mostly asleep. It hadn’t mattered—she’d just liked being with him.
The most surprising book in the package was the one about the entrepreneur who’d gone from rags to riches on stubborn grit and sheer determination.
It gave her a funny, fluttery feeling in her tummy to realize Abe really did take her business endeavor seriously. It wasn’t mockery, not when he’d gone to the effort of choosing these other books with her likes specifically in mind. He’d thought she’d like the book because she was an entrepreneur too.
Her eyes burned.
Her hand went to her phone, but she hesitated, the memories of her awful loneliness while she’d been with Abe holding her in place. Curling her fingers into her palm, she picked up the television remote instead.
She had to keep her distance if she was to have any chance of protecting her battered heart. Because this Abe? The one who sent her flowers and books and who dropped by to make sure she was all right? He was more dangerous than the man who’d broken her to pieces.
© Copyright 2016 by Nalini Singh 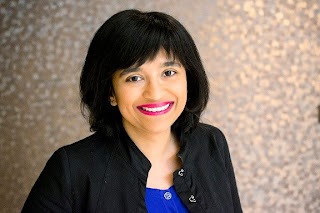 If you’d like to explore her other books, you can find lots of excerpts and free short stories on her website. Slave to Sensation is the first book in the Psy-Changeling series, while Angels’ Blood is the first book in the Guild Hunter series. The Rock Kiss books are all stand alone and can be read in any order.
STALK HER:  Website | Facebook | Twitter | Goodreads
GIVEAWAY
$50 AMAZON Gift Card 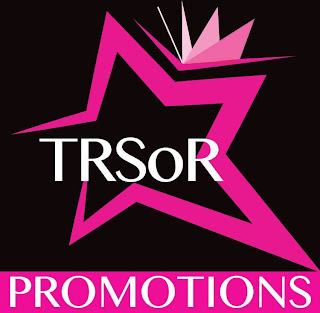