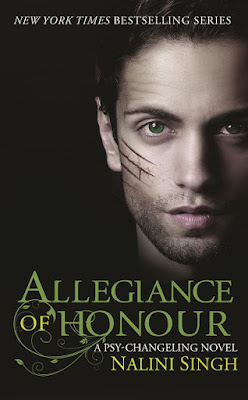 The Psy-Changeling world has undergone a staggering transformation and now stands at a crossroads. The Trinity Accord promises a new era of cooperation between disparate races and groups. It is a beacon of hope held together by many hands: old enemies. New allies. Wary loners.

But a century of distrust and suspicion can't be so easily forgotten and threatens to shatter Trinity from within at any moment. As rival members vie for dominance, chaos and evil gather in the shadows and a kidnapped woman's cry for help washes up in San Francisco, while the Consortium turns its murderous gaze toward a child who is the embodiment of change, of love, of piercing hope: a child who is both Psy . . . and changeling.

To find the lost, protect the vulnerable and save Trinity no one can stand alone. This is a time of loyalty across divisions, of bonds woven into the heart and the soul, of heroes known and unknown standing back to back and holding the line. But is an allegiance of honour even possible with traitors lurking in their midst?

Review:
There is a reason that Nalini Singh is my favourite author, she consistently writes amazing book after amazing book and she is the absolute queen of world building and creating fantastic characters. It's not often you get to book 15 in a series and find that the author has once again managed to give you something fresh and new but that is exactly what she has done with Allegiance of Honour. This book is a tribute to all the previous couples we've met and fallen in love with and all the side characters whose stories we're still desperately waiting for. It ties together a lot of little loose ends hanging around after the fall of Silence and at the same time it also kicks off the beginning of a brand new story arc.

If you've ever read Nalini's newsletter you'll know she loves to include little short stories and snippets giving us glimpses into some of her characters after they have their happily ever after. Well imagine a whole glorious book that gives you a chance to spend time with everyone again. This is an ensemble cast where no one couple takes centre stage for the whole story (although I think little Naya and the pupcubs steal more than their share the spotlight but more on them later!) but instead we get to see where they're all at in their lives right now. If it was any other author I might have been nervous about an ensemble cast but I have absolute faith in Nalini and she pulled it off more wonderfully than I ever could have imagined.

Not only does she give us a glimpse into couples from 14 other books (as well as several novellas and short stories) but she weaves in several new stories for them all to get involved in. One story in particular allows us to get to know certain members of BlackSea a little better and that helps build trust between all the different groups that are currently working together - DarkRiver, SnowDancer, Psy like Kaleb, Anthony & Nikita, the Arrows and the Empaths, the Human Alliance, the Forgotten, the Rats and Rainfire. I'm sure I've probably forgotten some but all of these groups have their own role to play in a desperate rescue attempt for one of the lost BlackSea changelings.

Naya is one of the stars of this book, she is the first child born to one Psy and one Changeling parent and nobody knows what kind of abilities she's going to have but she is definitely seen as a symbol of hope for all those who believe in the fall of Silence. Of course that makes her a major target for those who aren't happy about the recent changes. She's not an easy target to get at though and she has a huge family around to protect her. Naya is about 1 year old now and she is so utterly adorable in this book that she made my heart melt. There is also a lot of excitement around the impending arrival of Mercy and Riley's pupcubs. It was so much fun seeing all the adults talking about the pubcubs and placing bets on how many there would be along with the sexes and animal forms. I think Judd's guess amused me the most just because he'd put so much thought into it:

Judd had placed a two-and-two bet. Word was the pupcubs' changeling animal would be linked to the dominance of each respective parent, and Judd wasn’t about to bet against either Mercy or Riley. They were the most evenly matched dominant changeling pairing he’d ever seen.

I'm not going to tell you whether he was anywhere close to correct in his guess though, you won't get a word out of me! All I'll say is they're finally here and they're absolutely adorable!

Allegiance of Honour was everything I didn't know I wanted. If I had to put it into one word it could only be PERFECT. If you were worried that this series might be coming to an end let me assure you that we have so many exciting things still to come and I for one can't wait to get my hands on the next book. In the meantime I'm going to pick up my copy of Slave to Sensation and start reading the series again from the beginning because this book has reminded me just how much I adore all of the previous characters. 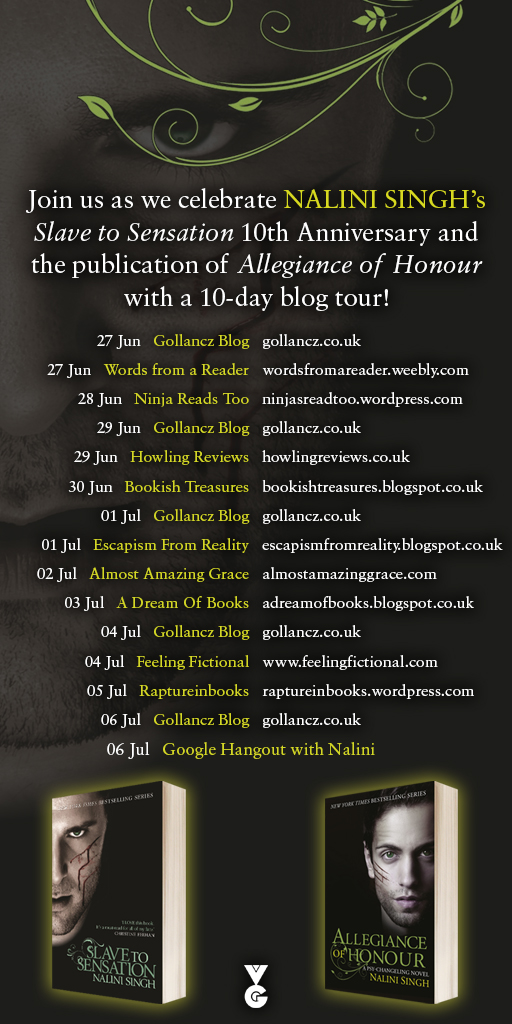 I'm thrilled to be taking part in the UK blog tour to celebrate the release of Allegiance of Honour and thanks to Gollancz I have a hardback copy to give away to one lucky UK winner!