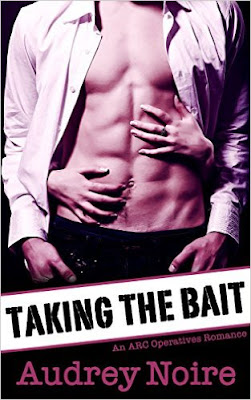 Daria Griffin is a newly-minted undercover operative with ARC on a mission with her partner, Nicolai Novik, an augmented human with super-fast speed. Their first job? Infiltrate a conference of billionaires as a newly-wed couple and dig up the dirt on shady business dealings. Daria's the bait, tasked with luring in businessmen with her unhappy-trophy-wife routine while Nicolai talks shop. But the operation goes all wrong when Nicolai starts acting strangely in the middle of it. Will they be discovered by forces who may not have their best interests at heart? And why is Nicolai acting so possessive of Daria when he never said more than a few words to her during training?

Part one of a three-part romance story in The ARC Operatives series!

Author's Note: Taking the Bait is a 12,000-word novella. No cliffhanger, HFN ending. Due to strong language and sexual content, this book is not intended for readers under the age of 18. The first scene from it's sequel is included as a bonus at the end of the book!

Review:
Audrey Noire's ARC Operatives series is about a group of undercover government agents, some of whom are augmented to have superhuman abilities like extra speed and strength. Daria is a new agent that has just completed her training and is about to take on her first undercover investigation. She is paired with one of her augmented classmates Nicolai and the two are to pose as a wealthy business man and his wife at a conference to try and get close to some billionaires who didn't come by their fortunes honestly. As the danger rises so does the heat between them but is it just the adrenaline rush or could it be something more?

When Audrey Noire asked me if I'd be interested in reviewing her superhero flavoured paranormal romance series I have to admit I jumped at the chance. Afterall who doesn't love a good superhero story? I was intrigued about ARC and wanted to know more about how the agents came by their superpowers but I have to admit that side of the world wasn't as fleshed out as I hoped. I don't think we even found out what ARC stands for (I apologise if I missed it!) and I don't think the superpowers were explained very well. If it's some kind of technology the government has to create augmented agents then why don't they give everyone the upgrade? For that matter why was Daria specifically recruited to the agency? She didn't seem to have any relevant training or special abilities to have been specifically targeted by a secret agency that most people don't even know exists.

It's only fair to point out that Taking the Bait is the first in a three part serialised novel though so the answers to my questions could come in later instalments and I enjoyed this enough that I'll continue reading to find out. The main characters were likeable and I'm curious about what they're going to discover during their undercover mission. There's no denying the chemistry between them but the sexy times fell a little flat for me thank to the lack of a condom (if you're going to have sex with a guy that has a big reputation the least you can do is protect yourself from disease!) and some uncomfortable phrases (let's face it, being split open by a monster cock is not sexy!).

I do think this series has potential though, especially since this was the author's first published work. The banter between her characters was fun, the world could turn out to be really interesting when we've had the chance to learn more about it and Taking the Bait was a fun, fast read with a nice amount of spice to it.