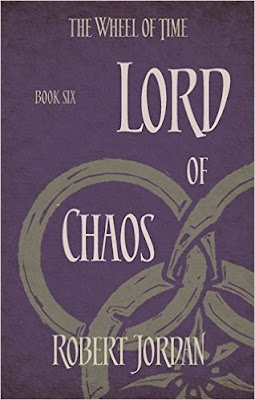 Rand al'Thor, the Dragon Reborn, strives to bind the nations of the world to his will, to forge the alliances that will fight the advance of the Shadow and to ready the forces of Light for the Last Battle.

But there are other powers that seek to command the war against the Dark One. In the White Tower the Amyrlin Elaida sets a snare to trap the Dragon, whilst the rebel Aes Sedai scheme to bring her down.

And as the realms of men fall into chaos the immortal Forsaken and the servants of the Dark plan their assault on the Dragon Reborn . . .

Review:
After being a bit disappointed with The Fires of Heaven I have to admit I was nervous about picking up Lord of Chaos, especially when I realised it was the largest book in the series so far (a whopping 1040 pages!). I actually put it off for a long time (& fell way behind all my buddy readers) because I was so nervous but apart from a kind of slow start (which, let's face it, most of these books have suffered from) this was much better than the last book. The last third was completely gripping and I actually had trouble turning the pages fast enough.

The Aes Sedai are up to all their old tricks again, and that's both groups of them. They're plotting, conniving and generally meddling in affairs that they should be leaving well alone. Whether you're looking at the traitors in the White Tower or the supposedly good group living in Salidar you have to be very wary of anything they say or do. I honestly don't understand how these women are so well respected, yes they can wield the One Power but they have no clue how to negotiate and I swear if you put a single Aes Sedai alone in a room she'd find a way to have an argument with herself. I just want to start bashing heads together because they're all so stubborn and pigheaded. The way they refuse to listen to anyone, even people who obviously have more knowledge about certain things, just drives me up the wall. Oh and don't even get me started on Alanna, if I was Rand I'd have rung her bloody neck!

Perrin is back which was fantastic, Faile was acting like a brat which wasn't. Berelain is an embarrassment to women the world over and acts like a dirty old pervert. Loial is living in fear since he found out his mother is out of the Steading and on her way to find him (bringing his future wife with her!). Nynaeve has finally stopped getting on my nerves to such a degree (although if she tugs that braid one more time I might have to find a way to climb inside the book and cut it off!) and I actually ended up feeling a tiny bit sorry for her. I'm totally over the weird love square that Rand has got going on, I don't feel the chemistry between him and any of the girls and couldn't care less how they end up working things out. Egwene finds love (considering how huge these books are I'll never understand how Robert Jordan manages to create such ridiculous cases of insta love!) and gets a surprising job offer. Elayne finally stopped flirting with Thom and now sees him more as the father figure he always should have been and Mat is becoming even more awesome. Rand is juggling a lot of different balls and unfortunately on this occasion something major gets past him which lands him in hot water and I'm also extremely worried about the army he is letting Taim build, I just can't see that ending well!

There is just so much going on in this story now, we have a huge number of characters to keep track of but I'm so completely invested in all of them that I have to keep reading to find out what happens next. Six books (and 5,137 pages!) into the series we've spent a lot of time getting to know everyone so love them or hate them and no matter how irritating they can be at times you just have to root for them (well, most of them anyway). So on that note I guess it's time for me to dive into A Crown of Swords.