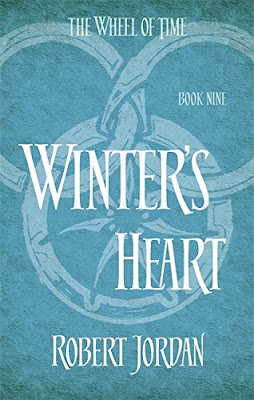 Rand al'Thor, the Dragon Reborn, is slowly succumbing to the taint that the Dark One has placed upon the saidin - the male half of the True Source. His Asha'man followers are also showing signs of the insanity that once devastated the world and brought the Age of Legends to an end.

And as Rand falters, the Shadow falls across a stricken land. In the city of Ebou Dar the Seanchan, blind to the folly of their cause, marshal their forces and continue their relentless assault. In Shayol Ghul the Forsaken join together to destroy the Dragon.

Rand's only chance is to hazard the impossible and remove the taint from the saidin. But to do so he must master a power from the Age of Legends that none have ever dared to risk - a power that can annihilate Creation and bring an end to Time itself.

Review:
I'm really starting to run out of things to say about the Wheel of Time series. To be honest there are so many things about these books that irritate me that it's a miracle I'm still reading them but here I am nine books in and not only still reading but also thoroughly enjoying myself in spite of the issues I have. I think I've just invested so much time and effort into reading this massive series that I'm determined to stick it out to the bitter end and I just have to know how things turn out for all of the characters.

A big highlight of this book for me was Mat's reappearance, especially since Tylin wasn't around much (if you've read my previous reviews you'll already know exactly how much I HATE her!). I'm very curious to see where his storyline is going, especially now he's found his Daughter of the Nine Moons and she definitely wasn't who I was expecting! I love Perrin but I'm a little fed up with his complete inability to see what is going on around him, I know he was just a lowly blacksmith but surely he can't be stupid enough to not see through Berelain's actions? She's almost as high up on my characters I hate list as Tylin at this point and I'm sick to death of reading about manipulative women in this series. I'm not even going to get started on the Aes Sedai and now the Sea Folk, it seems to me that women who access the power all turn into crazed megalomaniacs who would swear the sky is green and the grass is blue just to get one up on each other. The power makes men insane but the women aren't much better really, they just think they are. At least we're starting to see glimpses of the old Nynaeve though, I've really missed her so it's about time she found her brain again.

I'm also glad Rand and his little harem have finally started to sort things out, mainly because I'm hoping that means the characters will stop moping around now and we can actually move on with the storyline. I have to admit that their weird four person relationship is one of the most awkward things I've ever had to read about, it makes absolutely no sense to me that all the women are the instigators and I just find the interactions between them all really uncomfortable to read about so I'm glad they're now off in different directions again and hope they stay parted for many more books to come.

There isn't a lot of action in this book, it's like the beginning of a game of chess where a lot of time is being spent getting all of the characters into the right positions so that they can hopefully all go into battle at the same time later on. I'm at the point where I'm struggling to keep all the side characters straight in my head and half the time I'm having to backtrack to try and figure out which side this current group of Aes Sedai are on and whether I'm supposed to trust them or not. There are just too many characters with similar names that only have minor roles and just crop up for a few pages here and there for me to remember them all but for some reason it just doesn't matter. Picking up one of these books is like meeting up with old friends and they always leave me wanting more so I'm off to dive into the next one.