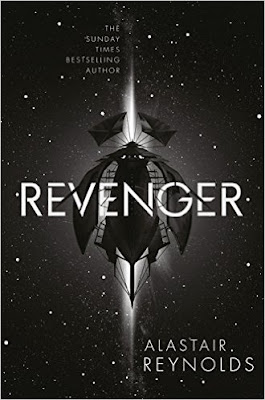 A superb science fiction adventure set in the rubble of a ruined universe, this is a deep space heist story of kidnap, betrayal, alien artifacts and revenge.

The galaxy has seen great empires rise and fall. Planets have shattered and been remade. Amongst the ruins of alien civilizations, building our own from the rubble, humanity still thrives.

And there are vast fortunes to be made, if you know where to find them.

Captain Rackamore and his crew do. It's their business to find the tiny, enigmatic worlds which have been hidden away, booby-trapped, surrounded by layers of protection--and to crack them open for the ancient relics and barely-remembered technologies inside. But while they ply their risky trade with integrity, not everyone is so scrupulous.

Adrana and Fura Ness are the newest members of Rackamore's crew, signed on to save their family from bankruptcy. Only Rackamore has enemies, and there might be more waiting for them in space than adventure and fortune: the fabled and feared Bosa Sennen in particular.

Revenger is a science fiction adventure story set in the rubble of our solar system in the dark, distant future--a tale of space pirates, buried treasure, and phantom weapons, of unspeakable hazards and single-minded heroism and of vengeance...

Review:
I've heard great things about Alastair Reynolds' Revelation Space series but for some reason I've never got around to trying it so when I was offered a copy of his new YA novel Revenger for review I jumped at the chance. This was actually a great introduction to his writing and it's definitely left me planning to read more of his books in the future, I'm actually hoping for a sequel to this one but I'll have to check out some of his other books while I wait.

Adrana and Fura have led fairly sheltered lives but their father's lack of business sense has left them struggling financially and the girls feel responsible for turning the family's fortune around. Adrana is the more adventurous of the two and she manages to almost trick her sister into joining Rackamore's crew of space pirates, promising Fura that they'll be able to earn enough money in six months to pay off their father's debts and to give them a secure future. Fura is reluctant at first but once she gets away from her father's influence she quickly starts to enjoy her adventure, until it all goes horribly wrong and she's left wishing she'd never left home at all. Fura now has a difficult decision to make, head home with her tail between her legs and beg her father for forgiveness or set out on her own terms to rescue the people she cares about and to get revenge for everything that they have suffered.

Alastair Reynolds has created a really interesting world here and I was fascinated by the idea of the baubles that are scattered throughout the universe hiding secret worlds that can only be accessed at certain times and contain all kinds of long forgotten treasures. It takes specialised skills to be able to get inside one of the baubles and if a team is lucky they can find riches beyond measure in a single trip. Of course the dangers are high and even if they're successful in their retrieval mission they may find themselves up against fellow pirates who have been targeting the same bauble. I think my only slight disappointment with the story was that I wanted a little more information about how these baubles were created and who left them behind, there are hints that they're leftover relics from alien civilisations but I'd have liked to have seen that expanded upon a bit more.

Revenger is a fast paced pirates-in-space adventure mixed in with a story of growing up and finding your place in the world. It's about being brave enough to do the right thing and standing up for what you believe in and it's about friendships and the family you can create for yourself. Although the story has a proper ending it definitely leaves things open for a sequel and I'm really hoping that we'll get the chance to spend more time with Fura and her crew of pirates.

I alternated between reading this myself and listening to the audiobook so I thought I'd mention that the narrator Clare Corbett did a great job telling the story. I did find that the volume wasn't always consistent which meant I'd have to turn it up high one minute only to be deafened the next but apart from that I enjoyed her performance.