This review includes all the free stories that have been narrated by Alice Healy and Thomas Price, stories by other narrators will be reviewed separately.

Short Stories narrated by Alice Healy and Thomas Price (circa 1954-):
(Unless otherwise stated all stories are available for free on the author's website)
The Way Home
The Lay of the Land
Target Practice 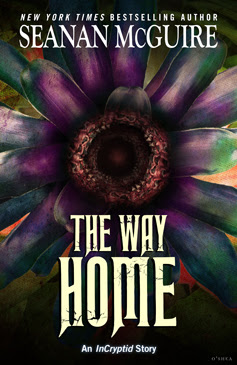 Alice Healy is sixteen years old and chafing at the yoke of her father's regard. His overprotective streak has blossomed in the absence of his wife, leaving his teenage daughter sneaking out at every opportunity, trying to find herself and her place in the world without any parental support. But she knows the woods, and she knows what she wants to do with her life; it's just a question of whether she can keep herself alive long enough to actually accomplish her planned future.

Thomas Price is a man still paying for his past. He's smart enough to understand that his assignment is essentially an exile, and has enough of a sense of self-preservation not to argue. Those who vex the Covenant of St. George rarely live long enough to explain themselves. At least in Buckley Township, he'll be far away from danger...unless you're counting Alice Healy.

Worlds will collide and a new story will begin as Thomas Price arrives in his new home, and Alice Healy does her best to stay alive long enough to say hello for the first time.

Review:
Thomas Price has been sent to Buckley by the Covenant of St. George to spy on the Healy family and report back to them. What they don't realise is that he's been questioning the Covenant's way of doing things for a long time now and he'd much rather join the Healys than spy on them. Thomas knows that the Healys aren't going to welcome a member of the Covenant with open arms but he's determined to find a way to prove that he's not a threat to them.

Alice Healy is sixteen and can't wait to get out into the world and explore it but her father is incredibly overprotective which makes life difficult. She just wanted to have an adventure when she sneaked off into the woods but she soon finds herself in over her head and starts to wonder if she's made a huge mistake. Luckily she's inherited her mother's skill with weapons and she won't go down without a fight.

This is currently the only story available about Thomas and Alice but they've been mentioned in the main books in the Incryptid series (they're Verity's grandparents) so I'm really hoping that Seanan McGuire is planning more stories about them, especially given the hints we've had about something major that happened to Thomas before Verity was even born. I'd absolutely love a little series of short stories about this couple just like we got about Fran and Jonathan, this story covers their first meeting but not much beyond that so there is definitely plenty more to tell.

It was nice to see Alice as a teenager, she definitely takes after her mother and is so full of life and ready for adventure. I thought it was really sad to see how miserable Jonathan still is though, it's understandable that he's overprotective but he really does take it too far and I felt quite sorry for Alice because of the way he treats her like a baby. I think Thomas is going to make a great addition to the family but I really do want to know more about him, this is only a very short intro to his character and as part of a mini-series it'll be wonderful but I don't think it works quite so well as a standalone.

I'm totally addicted to this series now though so I'm looking forward to getting to know some of the other short story narrators while I wait in hope for more about these two.


The Lay of the Land 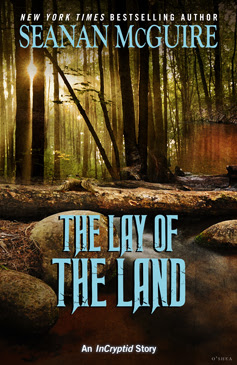 Thomas Price has seen the world, has studied and fought unbelievable creatures on every continent, and knows more about cryptids than almost anyone else alive. But he's never seen anyplace like Buckley Township, Michigan, and he's certainly never met anyone like Alice Healy, who is far too young for him, far too much a Healy for him, and far too wild to disregard. This is going to be an interesting assignment.

Unable to understand why her ever-tolerant father wants her to write off a newcomer as dangerous solely because of his origins, Alice Healy has set herself on a collision course with Thomas Price--a man who needs companionship, answers, and someone to guide him through the tangled ecosystems of the local wood, where the unwary go in, but don't come out.

It's the beginning of a beautiful friendship, and a new chapter in the story of the Healy family. Assuming that Alice can get Thomas through the woods alive, and Mary can convince Alice not to get Thomas murdered by her father.

Review:
I'm so excited that Seanan McGuire decided to write another story about Alice and Thomas, I'm actually hoping that she'll write a whole series of shorts about their early years together just like we got for Fran and Jonathan. Then I'm hoping we get at least one full length book about Alice's search for him and their eventual reunion. Come on she's GOT to find him eventually right?

Anyway, this story is set not long after Thomas arrived in Buckley. Jonathan is still convinced that he's there to do them harm on behalf of the Covenant but Alice and Enid aren't so sure and Alice is far too curious to stay away no matter how many warnings Jonathan gives her. Besides, if she doesn't introduce  Thomas to the local Cryptids then he'll probably end up accidentally getting himself eaten by one of them.

I think it's really sad to see how much Jonathan has changed since he lost Fran, it's understandable that he feels extra protective but he is totally stifling Alice so it's no wonder she's rebelling against him. I just wish Jonathan and Fran's story had turned out differently but I do think his reaction to things is fairly realistic. Hopefully he'll lighten up a bit when he starts to get to know Thomas a bit but I don't think it'll be easy to win him around. As far as Alice and Thomas go I like seeing the two of them together, she's only sixteen (he's twenty-six) so there is nothing in the way of romance between them yet but I'm hoping we'll get the chance to see them develop feelings for each other. 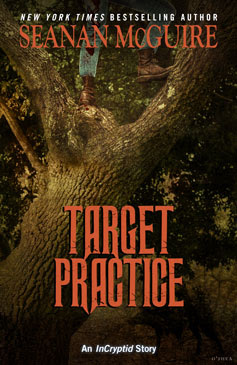 Buckley Township is starting to grow on Thomas Price, rather like a particularly aggressive strain of moss. He still has a lot to learn about his new environs, and about the people they bring him into contact with. People like Alice Healy, whose talent for getting herself into trouble is only exceeded by her inexplicable ability to get out of it again. Luck is not a dependable survival mechanism. And hers is running out.

Tensions are high and stakes are higher as Alice and Thomas both begin taking aim on what they want, and where they want to be when they get it.

Review:
Target Practice is a free short story about Alice Healy and Thomas Price that you can download from Seanan McGuire's website. This is the third story about them and the previous 2, The Way Home and The Way of the Land, are also available to read for free so I'd recommend reading them in order.

Jonathan is so desperate to keep Alice safe that he refuses to tell her anything about the Incryptid community and won't even let his parents teach her how to defend herself. His heart is in the right place but Alice has her mother's curiosity and banning her from doing something is a surefire way to make her do it anyway. So when Alice is exploring in the woods and wanders across a dire boar things nearly end in disaster, it's only the fact she's a fast runner and that Thomas shoots even faster that keeps her alive.

Meanwhile Thomas is continuing to question his ties with the Covenant of St. George, the more he learns about the Healys the less dangerous he finds them and he's starting to pay more attention to Alice too now that she's getting older. I'm loving the slowly growing attraction between these two and I'm really enjoying the way Seanan McGuire is slowly filling in their history. I'm still holding out hope for a full length novel about these two set in the current timeline of the main series but until then I'll happily devour as many short stories as I can get my hands on!
at 18:00