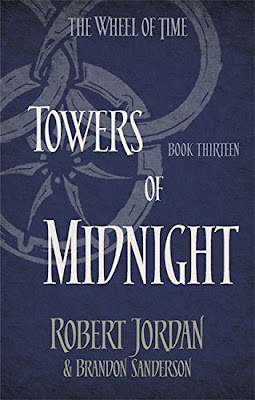 The Last Battle has started. The seals on the Dark One’s prison are crumbling. The Pattern itself is unraveling, and the armies of the Shadow have begun to boil out of the Blight.

The sun has begun to set upon the Third Age.

Perrin Aybara is now hunted by specters from his past: Whitecloaks, a slayer of wolves, and the responsibilities of leadership. All the while, an unseen foe is slowly pulling a noose tight around his neck. To prevail, he must seek answers in Tel’aran’rhiod and find a way--at long last--to master the wolf within him or lose himself to it forever

Meanwhile, Matrim Cauthon prepares for the most difficult challenge of his life. The creatures beyond the stone gateways--the Aelfinn and the Eelfinn--have confused him, taunted him, and left him hanged, his memory stuffed with bits and pieces of other men’s lives. He had hoped that his last confrontation with them would be the end of it, but the Wheel weaves as the Wheel wills. The time is coming when he will again have to dance with the Snakes and the Foxes, playing a game that cannot be won. The Tower of Ghenjei awaits, and its secrets will reveal the fate of a friend long lost.

This penultimate novel of Robert Jordan’s #1 New York Times bestselling series--the second of three based on materials he left behind when he died in 2007--brings dramatic and compelling developments to many threads in the Pattern. The end draws near.

Review:
So I reached book 13 in the mammoth Wheel of Time series, the last book (and last battle) is in sight and I have to ask myself am I glad I started reading it? The answer is without a doubt yes. There was a sticky patch in the middle there where I almost gave up but at that point I was probably already about 6000 pages in and so invested that I needed to keep going. It felt like Robert Jordan had lost control a bit and the story had started to wander in so many different directions that it took away from the main story line but that has improved so much since Brandon Sanderson took over and I think his books have probably been my favourite books of the series (certainly of the later ones anyway).

The pace is so much better now, he's tightened up the plot and is focused on the main characters we've been following since the beginning. The unnecessary side characters have all but been eliminated and that has made such a huge difference, there are still a lot of plots to follow but they're all interesting ones that are going to have an impact when it come to the final battle.

Rand has grown into his role as the Dragon Reborn and it feels like he might have a chance against the Dark One, Nynaeve is finally showing why she was named Wisdom of her village at such a young age (in fact she outshines Egwene in this book!), Mat attempts a daring rescue, Thom has an unexpected romantic encounter, Egwene has brought the White Tower back together with clever manoeuvring but she still drives me insane because of the way she treats Rand (they grew up together - surely she can give him a tiny bit of trust!?), Perrin makes some interesting discoveries in the Wolf Dream. The only character I still don't really care about is Elayne, she's not quite as bad as she used to be but it's still only Birgitte that make her chapters bearable.

While I'm excited to read A Memory of Light I'm also a little nervous, I think what I'm most worried about is how the Seanchan will be handled, their attitude to women who can channel is horrific and I'm finding it really hard to see a future where they'll willingly abolish slavery. I hope that whatever happens with them is a believable progression but I really need them to turn it around because I want to root for a happily ever after for Mat and Tuon! I guess I'm just sad that the series is nearly over, I'm not sure I'm ready to say goodbye to these characters yet and that's quite an achievement by Robert Jordan and Brandon Sanderson considering how considering the huge amount of time I've spent in this world already.