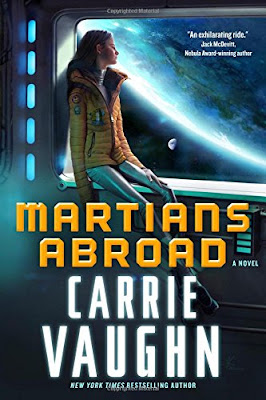 Well-known for her bestselling series Kitty Norville, Carrie Vaughn moves to science fiction with Martians Abroad, a novel with great crossover appeal. Polly Newton has one single-minded dream, to be a starship pilot and travel the galaxy. Her mother, the Director of the Mars Colony, derails Polly's plans when she sends Polly and her genius twin brother, Charles, to Galileo Academy on Earth.

Homesick and cut off from her plans for her future, Polly cannot seem to fit into life on Earth. Strange, unexplained, dangerous coincidences centered on their high-profile classmates begin piling up. Charles may be right--there's more going on than would appear, and the stakes are high. With the help of Charles, Polly is determined to find the truth, no matter the cost.

Review:
Polly and her twin brother Charles were born and raised on Mars, they don't really feel much of a connection to the place their ancestors originated so they're horrified when their mother announces that they're being sent to Earth to finish their education. Earth is a culture shock in so many ways, not only does the different gravity make even walking a much more difficult task than they're used to but they're also thrown in at the deep end thanks to gaps in their education and their totally different life experiences. It quickly becomes clear that the earthborn kids view off worlders as second class citizens so they're going to have their work cut out if they want to be accepted.

Martians Abroad by Carrie Vaughn wasn't quite what I expected but that's definitely not in a bad way because it was a thought provoking and enjoyable story. I thought she did a fantastic job of highlighting the how strange it would be for children raised on an inhospitable planet like Mars when they visited earth for the first time. From the way the increased gravity made it so difficult for them to carry out day to day tasks to the panic Polly felt the first time she stepped outside and suddenly realised she wasn't wearing an oxygen mask - something that would have killed her back home! There were just so many clever little ways that Polly and Charles were effected by their new surroundings and that made the story feel completely realistic and believable.

I hated the way the earth students treated those who had come from other planets but unfortunately that was incredibly easy to believe too. We've seen time and time again how humanity treats anyone they perceive as different and as horrible as that is it doesn't seem to be getting any better thanks to politicians who love to preach hate and intolerance. What I really loved was the way Polly and Charles handled their situation. Polly is the kind of girl who acts first and thinks things through later, she's impulsive and it often gets her in trouble but she's also a quick thinker and great to have by your side in an emergency. Charles is quieter and tends to plan ahead so he's usually the one trying to stop Polly doing anything too crazy and keep her out of trouble. What was interesting was the way the earth kids were so privileged and spoiled but had very little in the way of common sense, it was the off worlders who were better at problem solving because they'd had to learn things the hard way in life or death situations that the earth kids had never faced.

I don't want to go into detail about the plot but there was much more going on at their school than first meets the eye and I enjoyed seeing Polly and Charles work together to figure things out. Martians Abroad was the kind of book that you can easily devour in one sitting and I really enjoyed trying to figure out what was going on. As far as I know the story is a standalone but if Carrie Vaughn decides to revisit these characters I'll definitely be picking up any sequels.