I love Amanda Carlson's Phoebe Meadows' series so I'm thrilled to be taking part in the cover reveal for  the third book in the series, Exiled, today. I also have a giveaway for the first book in the series, Struck, so that'll give someone the perfect chance to catch up before the new book releases!

First though let's have a look at the stunning cover for Exiled! 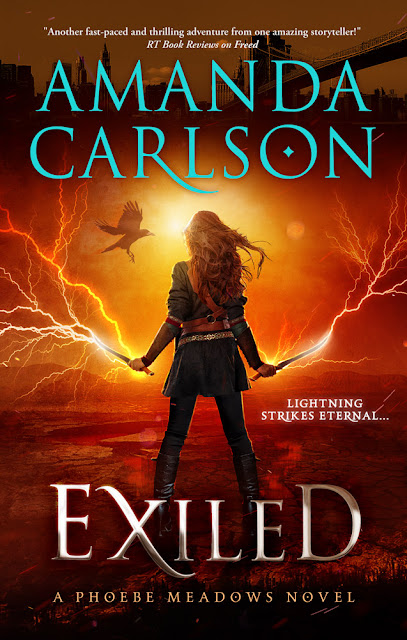 And they aren't planning to go down without a fight…

I’m a Minnesota girl, born and bred. I started writing stories about teenage girls and their social missteps when I was in high school. I still have the handwritten spiral notebooks to prove it.

I started writing FULL BLOODED because kickass heroines rock and I love shifters of all kinds. There aren’t enough warm-blooded girls to go around, in my opinion. I fell into Jessica’s story and had such a great time writing it and now I couldn’t imagine writing anything other than urban fantasy and paranormal romance. When you’re creating a story in this fantastic genre, it can contain almost any elements you can dream up. Creatively, for me, there’s nothing better.

I'm giving away 1 digital copy of Struck by Amanda Carlson (winner can choose between epub or mobi format). You can enter the giveaway using the rafflecopter form below, giveaway closes on the 21st of February and the winner will be contacted soon afterwards.