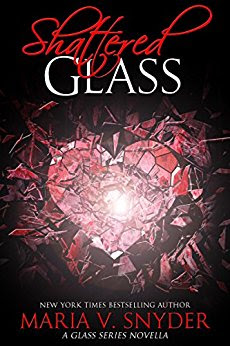 While trying to teach her adopted daughter, Reema, how to work with molten glass, Opal receives a letter from Master Magician Zitora Cowan requesting Opal's immediate help. Zitora resigned from the Sitian Council over two years ago to search for her lost sister, and no one has heard from her since. The letter is probably a trick, but Opal refuses to pass up the opportunity to help her mentor, who may be in genuine trouble. Good thing Opal isn't that easy to fool. With her two soldier friends Nic and Eve providing backup, the three travel to a small town in the Jewelrose Clan. But can they rescue the Master Magician without being caught in the same trap?

Review:
Maria Snyder is an auto-buy author for me, I love everything she's written but her Chronicles of Ixia books (the ones narrated by Yelena in particular) are my favourites so I bought Shattered Glass as soon as it was published. This story is set between Night Study and the upcoming final book in the series, it actually overlaps Dawn Study a little so I'd highly recommend reading this before you get the new one. There are certain revelations at the end that are going to have a big impact on Opal's actions in the final story.

It was really nice to get a chance to catch up with Opal, I'm still not convinced about her relationship with Devlin but I'm glad she's happy and I really enjoy watching her with her adopted daughter Reema. I actually think Reema is a pretty brilliant character and I'd love to have a spin off series featuring her a few years down the line when she's old enough to be off having her own adventures, I can't be the only one thinking she'd be a great match for Fisk can I? Just imagine the trouble those two would cause if they put their heads together? They'd take over the world in no time!

Opal's old mentor, Master Magician Zitoria, has been missing for several years now, ever since she went looking for her lost sister, so when Opal receives a mysterious letter from her requesting her help she immediately jumps to respond. Devlin isn't happy about her going alone but he has to stay behind to look after Reema so Opal recruits her friends Eve and Nic to help her.

I'm not going to say any more about the story because it's fairly short and would be too easy to spoil but I enjoyed seeing Opal in action again and this left me more eager for Dawn Study than I already was. I know not all readers are fans of authors writing additional novellas that are required to understand the full length novels in a series but I think it's worth pointing out that Maria wrote this to help raise funds to pay for her daughter's friend's treatment for breast cancer and I think it's worth buying for that reason alone. Even if you ignore the fact that your money is going to a good cause it's a fab little story and fans are going to love being back in this world.

Other Reviews:
Blackplume
If you have reviewed this book on your blog please leave a link to your review in the comments & I'll add the link here.