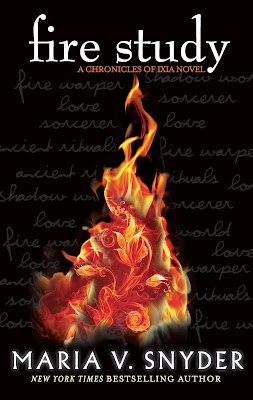 The battle of her life has begun

In the barren territory of Sitia, power comes at a price. Yelena Zaltana possesses the most terrifying magic in the district - the ability to capture and release souls.

While the sinister Sitian council meet to decide her fate, Yelena must capture a Soulstealer, her dark counterpart, until she discovers someone far more dangerous.

And in the war between good and evil, there can only ever be one victor.

Review:
I have become a huge fan of Maria V. Snyder since I first read Touch of Power last year and my experience with her Chronicles of Ixia series has just cemented her as one of my favourite YA fantasy authors. I'm beginning to think she can do no wrong because every single time I pick up one of her books I'm completely pulled into the world she has created and am captivated by her characters. I have come to love Yelena, Valek and their friends and I'm sad to say goodbye to them now that their part of the series has come to an end. I'm looking forward to getting to know side characters better in the next part of the series but I do hope we'll see appearances from some familiar faces too because I want to know how they get on in the future.

I have loved learning about Yelena's magical abilities and in Fire Study we get to see skills really put to the test. She failed to destroy the Soulstealer in Magic Study so she must go up against them once again but now they know of her powers they have been able to prepare for her attempt to stop them. The enemy she is facing has powerful allies who will stop at nothing to destroy Yelena and she has never been more at risk. Unfortunately there isn't anyone who can help her master her powers, knowledge of Soulfinders has been lost over the years because her abilities are so rare so Yelena has to work out a lot of things on her own. Thankfully she has good friends and people who care about her but letting them close enough to help just puts them at even more risk. Yelena has to decide who to trust and find a way to keep them safe while they work alongside her.

I don't want to say too much more about the plot for fear of giving spoilers so I'll just tell you that this is just as action packed as the first two books, there is so much going on and the characters are really up against it. We get to explore more of both Sitia and Ixia, spend time with familiar faces and get to know some not so familiar ones. It was really nice to learn a bit more about Opal who is the heroine of the next three books in the series and I'm really looking forward to finding out more about her glass blowing skills and the beautiful things she creates.

If you enjoyed the first two books in the series then I'm sure you'll love Fire Study just as much, the characters are in for a tough time but the ending was perfect and left me with a happy smile on my face. I had guessed at who was in league with the Soulstealer but I think we were supposed to and that didn't stop my enjoyment of the story. I can't recommend this series highly enough for fantasy fans but you definitely need to read the books in order starting with Poison Study. I'm just so relieved I have three more books already available to read - I know I'm going to be devouring them very soon.