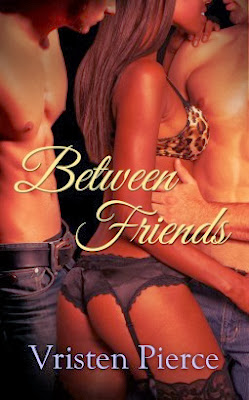 After being unceremoniously dumped by her long-time boyfriend, Stacy Washington hits one of the hottest clubs in town with her best friend, Nina. Stacy decides it's time to shed her good girl persona by letting go of her inhibitions. Relationships are trouble; casual sex is simple.

When she sees sexy bartender, Evan, she's instantly intrigued by his dark, good looks and his killer smile. Before she has a chance to get to know him better, an equally sexy prospect comes her way and this one is ready to play. Justin's not shy about telling Stacy exactly what he wants. She plans to have her way with both him and Evan until she finds out they're close friends. This could be awkward or this could be the most exhilarating experience of Stacy's life. She decides to take the plunge by coming between friends--in more ways than one.

Between Friends is a 21,000 word erotica novella.

Friends with Benefits Series:
Between Friends
Friends and Lovers

Review:
Stacy has just been dumped by her long term boyfriend and had her heart broken so she's sworn off of relationships, that doesn't mean she can't have a little fun though so she sets out to find herself a one night stand. She is attracted to the cute bartender Evan but ends up taking his best friend Justin home with her. They have a great night but don't exchange contact details and a week later she still can't get Evan out of her head. She goes back to the bar hoping to find him but would it be weird to take him to bed when he knows she slept with his best friend?

I enjoy reading a good ménage story to make a change sometimes so I was looking forward to reading Between Friends. It's a fairly short novella so I was expecting a hot read with very little in the way of relationship development and I guess that's exactly what I got but even so I have to admit it was missing something. I had a hard time connecting to Stacy, at the start she comes across as a fairly liberated woman who wants to take control of her life and enjoy herself which is great but I had trouble believing her actions. She didn't take a second to think about her safety when she takes a complete stranger back to her home after a five minute conversation and she does the exact same thing the following week with a guy she's had 2 short conversations with. I know it's a novella and things have to move fast but it just didn't feel realistic and that bothered me.

Her first encounter with Evan was pretty much an exact repeat of the one she had with Justin, the positions varied slightly but not enough to make things interesting to read about, the sex scenes felt very formulaic and I was bored when reading them. She then proceeds to go back and forth between the two guys, there is no secret in the fact that she is seeing them both which was good but there was also no mention of the three of them spending any time together until the day they decide to have a threesome. It seemed to come out of nowhere and if I'm honest the scene wasn't particularly well written either. It wasn't horrific but it definitely wasn't a turn on.

To top it all off you have a cliffhanger ending that I'm guessing is supposed to encourage you to read the sequel when it releases next year. Unfortunately in this case it had the opposite effect. I don't care about any of the characters, I didn't believe the feelings they had for each other and I'm not interested in seeing how things turn out for them so I won't be carrying on with the series. It's disappointing but there are a lot of really good ménage stories out there so I don't need to waste my time on mediocre ones.