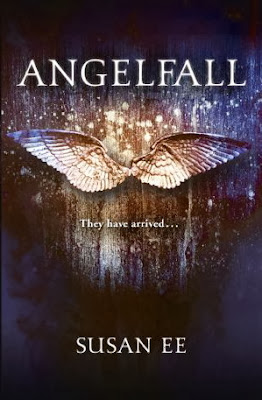 It's been six weeks since angels of the apocalypse descended to demolish the modern world.

Street gangs rule the day while fear and superstition rule the night.

When warrior angels fly away with a helpless little girl, her seventeen-year-old sister Penryn will do anything to get her back.

Anything, including making a deal with the enemy.

Penryn & the End of Days Series:
Angelfall
World After
End of Days

Review:
Angelfall is one of those books that completely exploded all over the blogosphere when Susan Ee first self published it, it was all my friends were talking about on Goodreads for months and I bought myself a copy way back in 2011 on the back of all the positive reviews I kept seeing. But I never actually got around to reading it myself, I had built up such high expectations that I was afraid Angelfall would never be able to live up to them and I didn't want to be the only one who didn't like the book. Fast forward to 2013 and the series has been picked up by UK publisher Hodder & Stoughton, I'd received review copies of not just Angelfall but also of World After yet I was still scared to start reading. Thankfully a couple of my friends who adored Angelfall wanted to re-read it before the sequel released and they convinced me to buddy read it with them. Now I'm partly kicking myself for not picking it up sooner but at the same time I'm also rejoicing that I don't have to wait 2 years for World After. In fact I'm planning on diving into the next book as soon as I've finished this review and I'm sure I won't be surfacing again until I've devoured it. To give you an idea of how much I loved Angelfall I'm going to say that I read the book TWICE in under 48 hours and that is coming from someone who rarely ever rereads books and who NEVER gets to the end of a book to immediately turn back to the beginning and start all over again. That's how good it is - it took my expectations and smashed them to smithereens and is without a doubt the best YA book I've read this year, if not ever.

I'm going to try and make this a proper review rather than just a fangirl squee fest but I'm making no promises. I just don't think there is any way I can do this book justice. Susan Ee has created a dark, gritty post apocalyptic setting where the world has been destroyed by wrathful angels. Nobody knows why the angels attacked but they do know that nothing will ever be the same again. It's now a case of survival of the fittest, if the angels didn't get you then you're still at risk from the street gangs who have taken over the cities and are fighting each other for control. The only hope Penryn and her family have is to make it to the countryside and find somewhere out of the way to hole up together. Unfortunately for seventeen year old Penryn getting her family to safety isn't going to be easy. For a long time she has been looking after her mentally ill mother and protecting her younger disabled sister Paige, she may be small and slim but thanks to her mother's paranoia she has taken years of self defence training and knows how to protect herself. When Paige is kidnapped by a group of warrior angels Penryn is determined to do whatever it takes to get her back, even if it means teaming up with one of her enemies.

I think Penryn is my favourite YA heroine ever, she makes mistakes and doesn't always get things right but every single action she takes is for her families' survival. She doesn't just talk the talk, she actually walks the walk and she is prepared to make difficult decisions and put herself at risk for those she cares about. More than anything in the world she wants to protect her sister and she doesn't care what she has to do to get her back. I absolutely loved the interactions between her and angel Raffe, the banter between them, the wariness they feel towards each other, the way they slowly grow to respect each other and even start to trust and care for each other - it was all just so, so perfect. There isn't really any romance as such in Angelfall but there are certainly hints at a potential for forbidden love in the sequel and by god I hope I'm right about that. I didn't want to fall for Raffe but I just couldn't help myself!

It's very hard for me to tell you much about the world building without giving things away but wow it was amazing. Susan Ee managed to throw in so many twists and turns that I seemed to spend the majority of the book trying to pick my jaw up off the floor, I was constantly gasping and shouting "holy shit" as I was reading and I loved that she was able to tug on my emotions so many times. I was shocked, horrified, heartbroken and tearful but I also laughed, cheered and swooned my way through the story. I've used the phrase emotional roller coaster before but I don't think it's ever been quite as appropriate as it is for this book, I feel like I've been through a wringer and I think it's going to take me months to fully recover. I know most people have already read this book but if, like me, you're late to jump on the Angelfall bandwagon don't put it off any longer. I really can't recommend this highly enough and I'd be amazed if this doesn't end up being my favourite book of 2013!

Other Reviews:
Movies, Books and More
If you have reviewed this book on your blog please leave a link to your review in the comments & I'll add the link here.