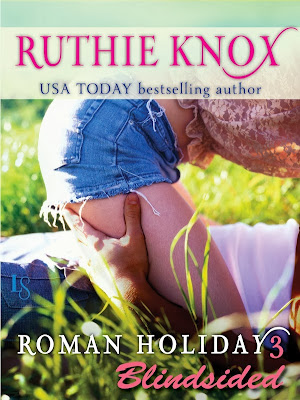 In Episode 3 of Ruthie Knox’s eBook original serial, Roman Holiday, Ashley has led Roman across state lines in an attempt to save her home. And he’s about to learn just how wily this wild child can be.

With his Escalade buried up to the axles in Georgia muck, Roman Díaz will do whatever it takes to put his Florida development back on track—but it never occurred to him that Ashley Bowman would start fighting dirty. Ashley figures all’s fair in love and war—and this is war, right? It can’t be love. Love doesn’t involve blackmail. So why does blindsiding Roman and forcing him to do her bidding make her feel so wrecked?

Review:
Blindsided is the third instalment in the Roman Holiday serial by Ruthie Knox and picks up the story immediately after Hitched ended. Ashley and Roman have arrived at the hippy commune just in time to join the drum circle and since Roman managed to get both his car and Ashley's trailer stuck in the mud escape isn't an option. The commune really is the last place on earth Roman wants to be and he couldn't get much further out of his comfort zone if he tried but Ashley is right at home and determined to use that to her advantage. She isn't above playing dirty to get what she wants no matter how guilty it might make her feel afterwards.

I have to admit I enjoyed seeing Roman at such a disadvantage in this instalment, he obviously has no idea what to expect or how to react to the people who live at the commune and it was amusing seeing him struggle. I quickly started to feel sorry for him though, it felt like people were being deliberately mean towards him and that didn't sit right with me. Even Ashley begins to feel guilty about things when she starts to think about it. I do like the fact that Roman has met his match and that he's starting to realise that he has to go along with Ashley to a certain extent if he wants to get his project back on target though. It was great to see past his cool exterior to get a glimpse of the emotional man he keeps hidden deep inside, he is finding it hard to keep his tough guy shell in place and I wanted to see him shaken up a bit.

The chemistry is definitely starting to build between them now that Roman has dropped his guard a bit. It seems like the more Ashley manages to rile him up the more attractive she finds him and the less in control he is the more he starts to see in her. They still have a long way to go before they can find any kind of compromise but it's going to be interesting an interesting journey. I'm really enjoying reading the Roman Holiday serial, as much as I usually prefer to devour a novel in one sitting I do think this has been split into well paced instalments that are a satisfying read but still leave you eager to continue the story. Each part has plenty of humour to make it a light hearted and enjoyable read perfect for when you're short on time and I'm looking forward to reading more.