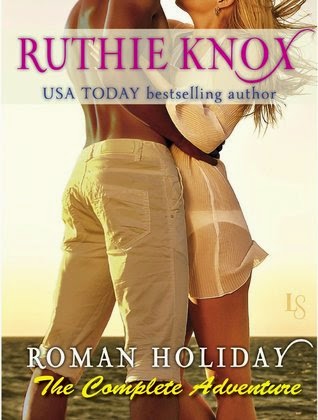 The wait is over with this eBook bundle that includes all ten episodes of Ruthie Knox’s steamy, irresistible serial, Roman Holiday. Like all the greatest road trips, Ashley and Roman’s journey is full of unforgettable twists and turns. But what’s their final destination?

Ashley Bowman has always been impetuous, but even she is a little shocked when she chains herself to a palm tree in the Florida Keys hours before a hurricane is due to blow in. It’s all with the hope of saving her childhood home from a heartless Miami developer. But the moment she meets Roman Díaz she realizes he does have a heart—it’s just encased in ice. Ashley’s determined to get Roman to crack . . . even if she has to drag him all over the eastern seaboard to do it.

Roman can hardly believe he’s been talked into driving across the country with this brazen wild child in a skimpy bikini. He tells himself he had no choice—Ashley insists he meets the elderly snowbirds whose community will be displaced by his career-making development deal. But in truth he knows that there’s something about Ashley that makes him want to get a little wild himself . . . and the closer they get, the more tempted he becomes.

Review:
I read the first five episodes of Roman Holiday last year when they were first released as individual ebooks but even though I really enjoyed them for some reason I never quite got around to reading the second half of the story. I think it's probably because there was a gap between the ebook releases and by the time the second half of the story had published it had been dropped down on my to read pile thanks to all the new books I'd discovered during the break. I'm glad that I decided to come back to the story though because I always love Ruthie Knox's writing and this story is no exception. I actually started the story from the beginning again which is a good thing because there was so much I'd forgotten about both Roman and Ashley.

These two characters are complete opposites, Ashley is a free spirit who spends her time flitting from one job to the next, travelling the world and collecting friends along the way. She never had much of a relationship with either of her parents and her grandmother was the only person who was ever there for her so she is shocked and horrified to discover after her grandmother's death that her grandmother planned to close the apartment complex that Ashley has always considered home and that she actually sold the plot to Roman so he could develop the land. Ashley doesn't want to see her home destroyed and she will do whatever it takes to change Roman's mind.

Roman is a very buttoned up and straight laced type of guy, he likes order and routine, hates being out of control and he also has a lot of time and money riding on the development of a major new complex on the Florida Keys. Roman has spent years trying to become "respectable" and is terrified that Ashley is going to come along and ruin all his plans.

On the surface the pair are a match made in hell, they have hardly anything in common and they both have completely different hopes and dreams for their futures. However that saying "opposites attract" is perfect on this occasion. The attraction between them is pretty much instant despite the fact they're on opposite sides of a war over the apartment complex and once they start to get to know each other they realise that they aren't quite so different when it comes to the important things. I love the way this couple balance each other out. Ashley teaches Roman to loosen up a bit, he's far too serious without her and probably heading for an ulcer or a heart attack if he doesn't learn to have a bit more fun. Ashley on the other hand has a far too haphazard approach to life, she needs to settle down just a little and start planning for the future rather than just flying by the seat of her pants from one mess into the next. Together they bring out each other's best qualities and tone down some of the worst and they make a surprisingly well matched couple. I really enjoyed seeing their relationship blossom and it happened slowly enough that it was completely believable.

This is another great story from Ruthie Knox, she's an auto-buy author for me when it comes to sweet and sexy contemporary romances - her stories never fail to make me laugh out loud and she has a knack for writing about slightly unusual and messed up characters. I can't wait to see what she comes up with next.