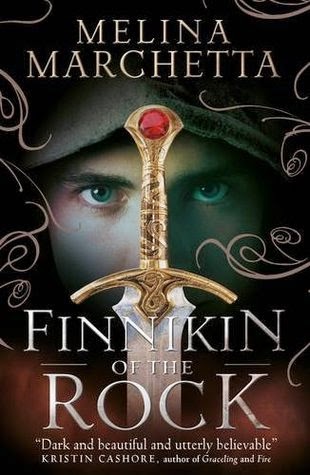 Finnikin's kingdom has been left in ruins.

The royal family has been slaughtered at the hands of a murderous imposter, and exiles roam the land. When Finnikin encounters Evanjalin, an enigmatic young woman who claims the heir to the throne still lives, his only choice is to trust her. In spite of his doubts and with the future of his people at stake, Finnikin must return to Lumatere and rid his kingdom of its brutal curse.

Review:
I have heard so many people rave about Melina Marchetta's writing and so many of my friends love the Lumatere Chronicles that I jumped at the chance of joining a mass group read of the series on Goodreads. I'm so glad I did because I absolutely loved Finnikin of the Rock and I was completely hooked on this story right from the first couple of pages.

When the Lumatere Royal family was brutally murdered and the imposter king stole the throne a curse was placed upon the kingdom that sealed the boarders and separated a whole nation. Those who escaped have been forced to spend the last 10 years living as exiles desperately searching for a way to return home, while nobody knows what happened to the people who were left behind. Finnikin is one of those exiles and he has pretty much given up hope of returning to Lumatere, instead choosing to focus on finding a place where his people can be together and start afresh. Until he meets Evanjalin, a young woman who claims to have visions and who tells Finnikin that the prince Balthazar survived the slaughter and is ready to bring his people home. Finnikin is sceptical but Balthazar was like a brother to him and if there is any chance that he is still alive then he has no choice but to go with Evanjalin to find him. But can Finnikin and Evanjalin break the curse and get their people safely home so that Lumatere can be reunited once more?

I think the thing I loved most about Finnikin of the Rock are the characters, Evanjalin and Finnikin are both very complex and multifaceted, they have strengths and weaknesses and they both make mistakes which make them much more human. Finnikin has spent years travelling the lands trying to make a list of all the surviving refugees, he has seen so much suffering and is desperate to find a way to bring his people back together even if it means giving up on his dream of taking them home. Evanjalin has more complicated motives, she does a lot of things that I don't necessarily agree with but everything she does she does for a reason. She's almost like a puppet master, the only one who sees the bigger picture and the one who is pulling on everyone's strings to control the outcome of the play. At times I was shocked by the things she did but I was always fascinated to see what she would do next and how things would tie together. I think she's one of the most fascinating YA heroines I've come across in a long time and I had so much fun speculating about the secrets she was keeping and what her long term goals were. I loved the way the relationship between Evanjalin and Finnikin builds, they start as reluctant allies but slowly grow to respect and trust each other and gradually become so much more. Their relationship was completely believable and I loved every minute of it.

It isn't just Evanjalin and Finnikin who are brilliant though, and so many of the side characters are incredibly well drawn out too. I loved seeing Finnikin and his father reunited after such a long time apart, the father/son bond was so well written and it was fantastic to see them find hope in each other. I'm also completely invested in the story of Trevanion and Lady Beatrice, I loved the wisdom of Sir Topher, I enjoyed the banter of the King's guard and I can't wait to see more of Lucian and Tessadora. Not all of the characters are easy to like though and Froi in particular did something that I find completely unforgivable towards the beginning of the story. It's a testament to Melina Marchetta's ability to create such fantastic characters that I found myself warming to Froi just a fraction towards the end of the book though. I still hate what he did and don't think I'll ever be able to completely look past that but I like the changes we've seen in him so far and he's definitely come a long way from the boy he once was. I'm intrigued to see how my opinion of him will change when I read the next book.

Finnikin of the Rock is a fantastic story, it's complex, action packed, heart breaking and beautiful all at the same time. It's the kind of story that makes you think and one that stays with you for a long time after you finish reading it. I'm dying to carry on and read the rest of the series but I'm already thinking about how much fun it will be to reread this story, especially now that I know what is coming and will be able to spot more of the clues that Melina Marchetta scattered throughout the novel. This is a must read book for YA fantasy fans and one I know I'll be recommending for a long time to come!