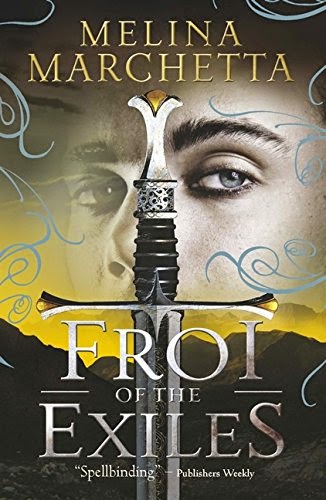 Blood sings to blood . . .
Those born last will make the first . . .
For Charyn will be barren no more.

The curse on Lumatere has been broken, and Froi, wild as he is, has finally found somewhere he feels he belongs: bythe side of Finnikin and the queen. However, he must channel his savage side when he is sent on a mission to a rival kingdom. With a frenzied princess roaming the palace, and danger lurking in every corner, Froi needs to discover the truth before it's too late.

Review:
I absolutely loved Finnikin of the Rock when I read it last year but I have to admit I was nervous when I realised that Froi was the main character of the sequel. After one particular scene with him in the first book I was absolutely convinced that I would never be able to like his character and had nearly made up my mind not to continue with the series but then by the time I finished reading Finnikin Melina Marchetta had already gone some way towards showing a nicer side to Froi so I decided to give it a chance. I'm glad I did because this series really is fantastic, it's dark and some of the characters go through some pretty horrific things but I'm totally invested in what happens to them and desperate to see how the series finishes.

If you read the first book (and I really don't recommend continuing with this review if you haven't!) then you'll know exactly what scene with Froi I'm talking about and I'm sure I'm not the only one who was horrified by his actions. I still haven't forgiven him for what he tried to do to Isaboe and to be honest I don't think I ever will but I still ended up growing to really care about his characters and that just proves what a fantastic writer Melina Marchetta is. Froi is a messed up guy, he had a terrible upbringing and saw a lot of horrific things when he was living on the streets. I'm not trying to excuse his actions, there really is NO excuse for what he did, but it does make his thought processes easier to understand. His whole life has been about pain and he learned at a very young age that if you're not the one dishing it out then you're the one who is being made to suffer. Like I said that's no excuse but Froi never once tried to excuse his actions. It is obvious that he regrets what he did and he tries every single day to make up for it but he doesn't ask for, or expect, forgiveness. I couldn't have come to like him if I didn't feel like he regretted his actions and was trying to atone for his past mistakes and he totally won me around.

Froi of the Exiles is a huge book (just over 700 pages) but it's one I absolutely devoured and didn't want to put down for a minute. It's set three years after the first book and although this is mainly Froi's story we also get to catch up with all our favourite characters and see how they're getting on now. There have been big improvements for some of them and life in Lumatere is finally starting to settle down now that all of the refugees have been able to return home but there is still a lot of resentment and confusion between those who were left behind and those who were on the outside. Finnikin and Isaboe are trying to bring their people back together but it isn't easy and everyone is desperate for revenge against the king of Charyn, the person who cursed them in the first place. When they have the opportunity to get close to the king Froi is sent undercover but what he discovers when he reaches Charyn is completely unexpected. In fact, the people there are suffering just as much as the people of Lumatere have and Froi has some very difficult decisions to make, especially when it comes to Charyn's princes Quintana.

I absolutely loved Quintana, she is completely crazy but utterly brilliant and she's one of the most complex characters I've come across in a long time. I don't really want to tell you much about her because it's much better for you to discover her for yourself but she has been put in such an impossible situation that she's pretty much split her mind in two to protect herself. She definitely has multiple personalities and it was completely heartbreaking to see how much she has suffered for her people. She's so funny though, at one moment she'll be completely innocent and naive but the next she's like a wild cat spitting and fighting to defend herself. I loved how Froi was able to see through her sharp edges and understand how vulnerable she was and seeing the two of them together was adorable.

I honestly don't have the words for how much I loved this book. Melina Marchetta turned me into an emotional wreck, she ripped my heart into shreds and then set fire to the remains one minute but then had me laughing out loud the next. This is a book of heartbreaking tragedies and incredible injustices but also of characters with huge amounts of inner strength and hearts of gold. There are epic love stories and wonderful friendships as well as deep betrayals and surprising family connections. The plot is so complex that it's impossible to guess what will happen next and there were times when I was so shocked I nearly fell out of my chair. I will warn you now that it ends on a killer cliffhanger - seriously if you thought the ending of Finnikin of the Rock was bad you've not seen anything yet! - so you're going to want to get your hands on a copy of Quintana of Charyn ready for as soon as you finish this book. I have so much love for this series and I really do think it's one that everyone should read. It may be set in a fantasy setting but there are so many things about it that make it feel relevant to today, the characters are incredibly easy to relate to and I don't think many people would be able to read these books without getting some kind of strong emotional reaction to what happens.