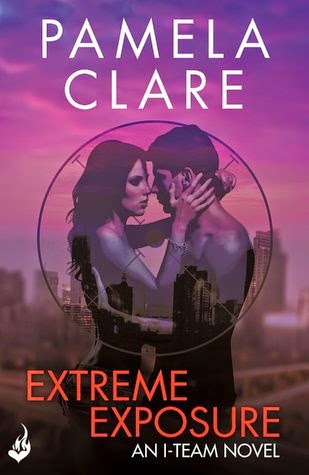 In the years since her child's father left her, Kara McMillan has kept men at bay. The hard-boiled journalist has vowed never to become vulnerable again, however lonely she feels.

With his dangerous good looks, charm and power, Senator Reece Sheridan could have just about any woman he sets his piercing eyes on. But he's intrigued by only one: gutsy, sensual reporter Kara, who promises to be every bit the firebrand in bed that she is in print.

But this is no fling. A sudden political scandal - and attempts on Kara's life - threaten to drive them apart. Yet maybe adversity will draw them into a bond even more intense than their steamy embraces . . .

Review:
Kara works hard juggling her career as an investigative reporter and life as a single mum and it doesn't leave her much time for dating. Past experiences have left her wary of men anyway so she'd rather focus on her son and her job. She meets Reece on a rare night out with a friend and the chemistry is there from the very beginning but getting involved with a Senator could be a huge conflict of interests, especially considering the story she is currently working on. Kara has been contacted by a whistleblower and the deeper she digs the more it looks like the company that has been accused of illegal pollution has someone on the Senate in their pocket. As Kara's story puts her life in danger she is forced to decide whether Reece can be trusted, not just with her life but also with her heart.

I have heard so many great things about Pamela Clare's I-Team series from American bloggers so I was incredibly excited when I found out that the series now has a UK publisher and when Headline Eternal offered me review copies of the first three books I jumped at the chance of reading them. Romantic Suspense is a genre that I've been wanting to read more of and I have to say that this series was a great place to start, Extreme Exposure has fantastic characters, a really sweet and sexy romance and of course plenty of action and danger.

I loved how normal Kara is, she's just a hard working mum who is juggling a demanding day job with the needs of her four year old son. She feels guilty that she can't spend more time with Connor but at the same time it's up to her to pay all the bills and she loves working as a reporter. She's smart, witty and very good at what she does. Kara won't let anyone intimidate her and she is very determined to get to the truth but at the same time she isn't willing to take risks with her safety. Apart from one mistake towards the end of the book, which to be fair was down to an emotional reaction when she was under extreme pressure so I found it very easy to forgive, she has the street smarts to survive and unlike some heroines I wasn't left rolling my eyes wondering how she'd even survived the first chapter.

Reece is an idealist, his first love is teaching but he took a step into politics to prove to his students that one man can make a difference. He is determined to make positive changes and is well known for supporting bills that will help the environment. I found it incredibly easy to fall for Reece, he has a great sense of humour but most of all he was incredibly sweet and patient when it came to Kara. He could tell how badly she had been hurt in the past and wanted to prove that not all men are as useless as Connor's father. I loved the interactions between him and Connor too, he takes Kara's son under his wing and falls in love with him just as much as with his mother. Together Reece and Kara make such a great couple and I enjoyed spending time with them both, the sex was hot but it was the romance that really made me swoon and I loved every minute of it.

Extreme Exposure is a fantastic, fast paced read that had me alternating between laughing out loud and swooning when I wasn't about to fall of the edge of my seat. I'm already looking forward to getting to know the rest of the I-Team and can't wait to get started on the next book, Hard Evidence, I think I may have discovered a new favourite series!