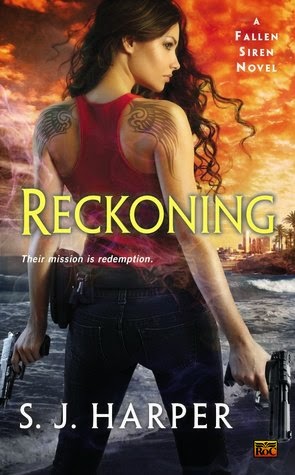 Special Agent Emma Monroe has a secret. She’s a Fallen Siren, cursed by the gods and banished to Earth for her failure to prevent the kidnapping of Persephone. As an FBI agent she saves the lives of others believing redemption could be one rescue away.

Her partner Zack is a werewolf and former Black Ops sniper who once carried out a string of questionable assignments. Now he’s determined to atone for his past. Ironically, there’s a portion of his past Zack doesn’t remember—an affair with Emma. Giving into their attraction for one another almost led to their undoing. Now it’s back to business as usual.

While trying to unravel the mystery behind a series of kidnappings in Southern California, Emma and Zack become entangled with political tensions in the vampire and Were worlds. Not to mention the struggles they face in their relationship with one another. With so much uncertainty, they come to realize the only thing they can really count on is one another…or can they?

Review:
Emma is a siren who was cursed thousands of years ago by the goddess Demeter for not preventing Hades from kidnapping her daughter Persephone. Emma and her sisters have spent their whole lives trying to atone for their mistake in the hope that they will achieve redemption and be allowed to return to their home. As part of their punishment they are forbidden from falling in love, if they do their partner will suffer Demeter's wrath. Emma is working as an FBI agent and has a strong bond with her werewolf partner Zack but to protect him and save his life she had to wipe his memory of the intimate part of their relationship. It's the worst kind of torture for Emma, she gets to spend her days with the man she loves knowing that they can never have any kind of personal relationship. Zack may not remember the time they spent together but that doesn't mean he has lost his feelings for her and he doesn't understand what has Emma running so scared when he knows she is attracted to him.

This series is going to break my heart, I can't even tell you how much I love Zack and want him and Emma to find a way to be together but everything is against them and has been from the very beginning. The opening few pages of this book almost had me jumping for joy but even though I knew deep down that things couldn't possibly be what I thought they were I still found myself incredibly disappointed when I realised that Emma has started a relationship with someone else. The only reason she is with the vampire Kallistos is because she knows there is no chance she will fall in love with him and that's a pretty sad kind of relationship if you ask me. She is with him because she wants a connection with someone but he will never be that equal partner she has in Zack. I hate to say it but I'm really not a fan of Kallistos, I wouldn't trust him as far as I could throw him and I don't think he has Emma's best interests at heart. Unlike Zack I can't imagine Kallistos risking anything to protect her unless he has something else to get out of it. Kallistos lies to her, he treats her like his property and I don't think he has any respect for her.

Seeing Emma with Kallistos was enough to drive me crazy, it was just so obvious that they're wrong for each other and I really wanted to climb into the book and shake some sense into her. I can understand why she is afraid to be with Zack and she's doing it to protect him but that's no reason to be with someone else. I know she's a siren but women can be single and happy for crying out loud! We do get a bit of light at the end of the tunnel as far as Emma and Zack goes later on in the book but they aren't out of the woods yet and it's quite obvious that Demeter has a few more tricks up her sleeves when it comes to the two of them. I really do want to see them work things out though because they're obviously meant to be together.

I know I've spent a lot of time talking about the romance but that isn't all that this series is about and just like with the previous stories there is plenty of action and mystery going on as Emma and Zack investigate another missing persons case. This time they are looking into the disappearance of three teenage girls, girls from poor families that have received no ransom demands. Emma is determined to find them and bring them home but as they dig deeper they find more questions than answers. Can they find the girls in time or have they already lost their lives?

This series is going from strength to strength and I really hope we don't have to wait too much longer for the next instalment!