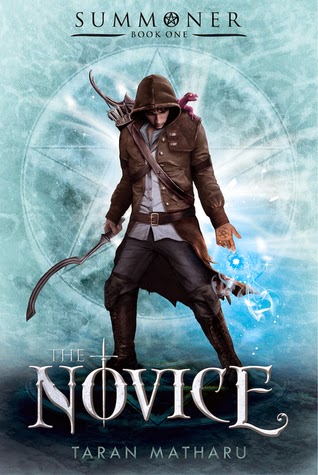 Fletcher was nothing more than a humble blacksmith's apprentice, when a chance encounter leads to the discovery that he has the ability to summon demons from another world. Chased from his village for a crime he did not commit, he must travel with his demon to the Vocans Academy, where the gifted are trained in the art of summoning.

The academy will put Fletcher through a gauntlet of gruelling lessons, training him as a battlemage to fight in the Hominum Empire's war against the savage orcs. Rubbing shoulders with the children of the most powerful nobles in the land, Fletcher must tread carefully. The power hungry Forsyth twins lurk in the shadows, plotting to further their family's interests. Then there is Sylva, an elf who will do anything she can to forge an alliance between her people and Hominum, even if it means betraying her friends. Othello is the first ever dwarf at the academy, and his people have long been oppressed by Hominum's rulers, which provokes tension amongst those he studies alongside.

Fletcher will find himself caught in the middle of powerful forces, with nothing but his demon Ignatius to help him. As the pieces on the board manoeuvre for supremacy, Fletcher must decide where his loyalties lie. The fate of an empire is in his hands . . .

Review:
From the minute I saw the cover of The Novice I wanted to read it, I'm a huge fantasy fan and that stunning cover totally did it's job on me. Then I heard that the story was a Wattpad sensation and to be honest that made me a little nervous, I know from experience that being a Wattpad hit doesn't always mean a book is good. In fact, some of the Wattpad success stories I've attempted to read have been pretty terrible and I really, REALLY didn't want that to be the case here. I'm so glad I decided to give this story a chance though because I ended up really enjoying it, it's fast paced and very easy to read and it actually managed to pull me out of a really annoying reading slump where I'd DNFed 6 books in a row!

The Novice isn't perfect, there were times when I found myself getting the secondary characters muddled up so I had to backtrack to remind myself who was who and the plot is fairly easy to guess because of the similarities to several other well known stories but overall there were far more positives than negatives and I think the series as a whole has a huge amount of potential.

I really liked the main character Fletcher and I'm looking forward to seeing more of him as the series continues. Abandoned as a baby Fletcher was adopted by the town blacksmith and has had a fairly good life, he works hard but has been well cared for and his adoptive father obviously loves him. Fletcher is an apprentice blacksmith and he fully expects to spend his life working alongside Berdon supplying swords for the army and shoeing horses. Everything changes the day he finds an old scroll though, when he accidentally summons a demon while reading it. Demons in this series aren't quite the evil things we expect them to be though, in fact they are kind of a cross between the Daemons from Philip Pullman's His Dark Materials series and pokemon. There are numerous different types of demons, they all have different abilities and different power levels and summoners are able to create a bond with them so the demons will do their bidding. Fletcher's demon, a salamander called Ignatius, is utterly adorable and I loved him.

Summoners are rare but extremely useful in the ongoing war with the Orcs because the demons they control can make a huge difference in the outcome of any battle. When Fletcher's summoning abilities are discovered he is sent to the Vocans Academy where he will be trained alongside other summoners and learn everything there is to know about demons. It is only recently that commoners have been accepted into the academy, previously it was believed that only those of noble blood were capable of summoning, but now they are so desperate for demons to help turn the tide of the war the rules have changed. Not everyone is happy about the new system though and there is a lot of bad blood between the nobles and the commoners, something that isn't helped by the academy accepting their first ever dwarf and elf students too.

The Novice is mainly Fletcher's story, we get to see him grow as he learns more about his abilities and tries to find his place in the world. I really liked how loyal he is, he's the kind of guy you'd want to have at your side because he always has his friend's backs, even when that puts himself in danger. He isn't afraid to stand up for himself even against people who are stronger and more powerful than he is but that doesn't mean he is stupid and I enjoyed seeing him come up with smart ways to protect himself. The world building is interesting, The Novice touches on themes of bullying & racism and there is also plenty of politics. I have lots of questions about the ongoing war that I'm hoping will be answered as the series continues but this was definitely a strong start that has hooked me enough to want to carry on reading.