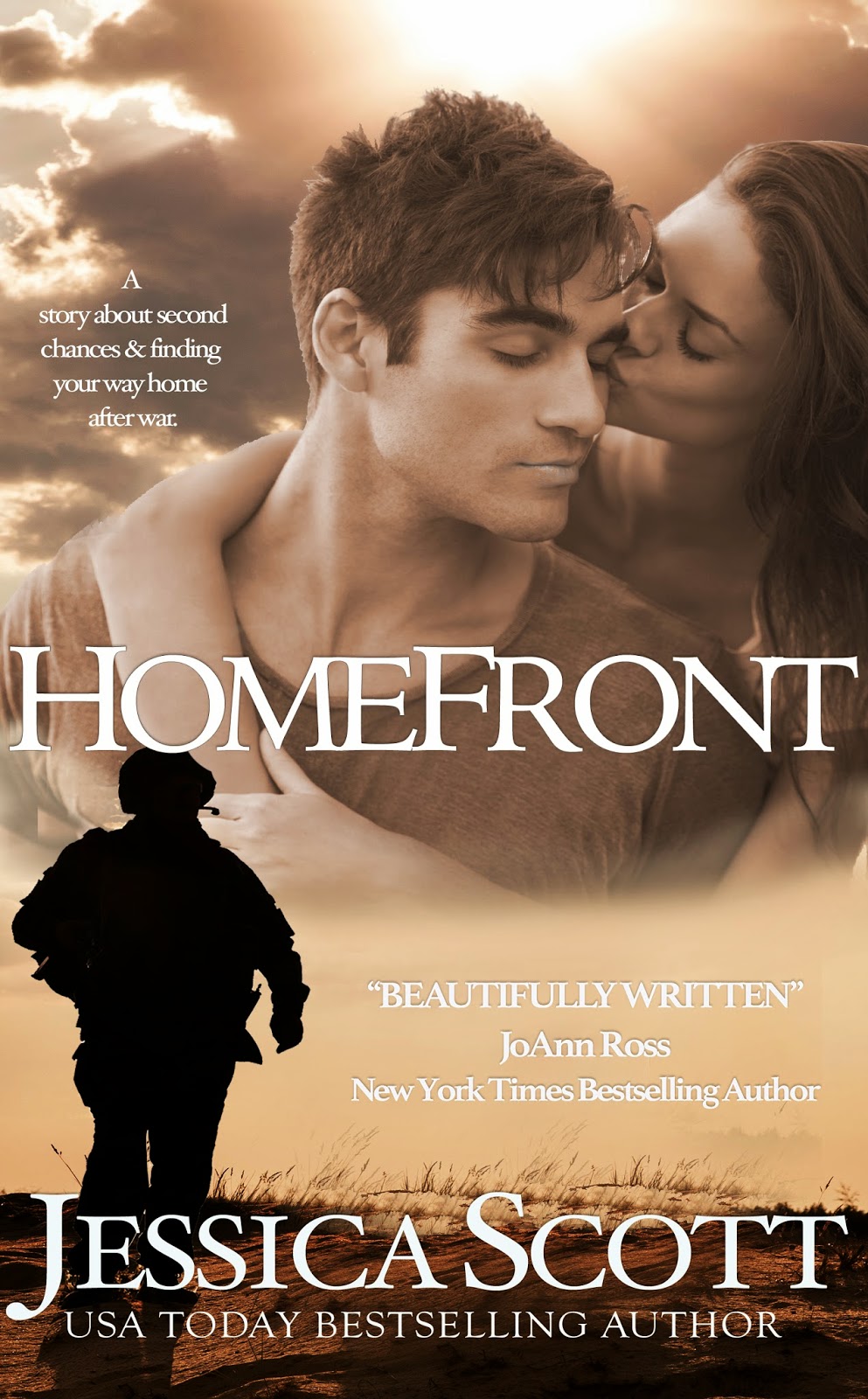 First Sergeant Gale Sorren waited a war and half a lifetime for a chance to get stationed near the ex-wife who left him years ago. When he finally musters the courage to see her, the life he imagined she was living was nothing close to the reality.

Melanie never stopped worrying about Gale each time he headed off to war. But he's never been there when she needed him and she's had fifteen years to steel her heart against him.

But when Gale moves to Fort Hood, he finally has a chance to make things right with Melanie and the daughter she raised without him.

Can Mel trust her heart to a man who has always let her down?

Review:
I love Jessica Scott's Coming Home series so I was really excited to find out she was writing a spin off and couldn't wait to read Homefront. Although you'll spot some familiar faces if you've read the previous stories each full length novel focuses on a different couple and works really well as a stand alone. I've loved all of the books I've read by this author though and would happily recommend any of them!

Homefront is a story about second chances, it's about reconnecting with old loves, letting go of past mistakes and forgiving people for the hurt they've caused. It's about rebuilding trust and focusing on the future you always wanted but never expected to have. Mel and Gale were young when they fell in love and married, they were crazy about each other but the pressures of a new baby and Gale's long deployments overseas tore them apart. Mel felt that Gale was never there for her when she needed him and decided she would be better off alone but she never stopped loving him and was never able to move on and start a new relationship. Gale never meant to let Mel leave him without a fight but spending so much time downrange didn't give him much of a chance to talk her around. He never felt worthy of her anyway and came to the conclusion that she was better off without him.

Now, 15 years later, Gale has been assigned to Fort Hood and is living near his wife and daughter for the first time in years. He is determined to take the opportunity to reconnect with the woman he never forgot and to build a relationship with his daughter but it's not going to be easy to convince them that he is home for good and that he wants to be a solid presence in their lives. Things haven't been easy for Mel and her daughter, Jamie is a troubled teen with a lot of issues to deal with and their mother/daughter relationship is very strained. I actually found this side of the story quite hard to read at times because it reminded me so much of the issues my mother and I had when I was Jamie's age but that just shows how realistic the writing is and how much I connected with the characters.

Mel isn't used to Gale being someone she can rely on, in the past whenever she has needed him the army has got in the way but now Gale is making a determined effort to be there to support her and she realises how much she enjoys having him around. I absolutely loved seeing them reconnect, they obviously had a deep and long lasting love between them but they realised that they had both made mistakes in the past. They were able to talk through their issues though and find ways to get past previous hurt and disappointment. They are a great couple with fantastic chemistry and a deep respect for each other. Seeing them working as a united front against Jamie was great and I enjoyed the added emotional pull of seeing Jamie's relationship with each of her parents slowly improve throughout the story.

Homefront was a great start to this series, it was great to catch up with a few familiar faces but what I enjoyed most was spending time with this little family and watching them put their lives back together so I hope we get to see more of them in the next few books. After the War is definitely at the top of my wish list.