Review: Outside In - Maria V. Snyder 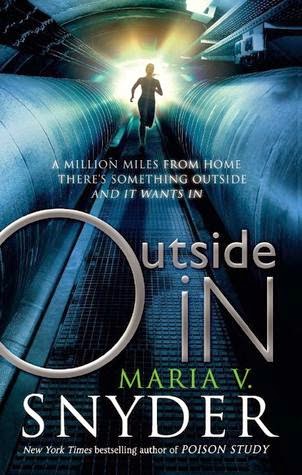 There's something outside.
It wants in.

I'm Trella, I used to be a scrub, cleaning the pipes and corridors of INSIDE. Then I found a whole world beyond the cube we live in and accidentally led a revolution against the Uppers. Now everyone is trying to figure out what happens next.

Except me. The fight's over and I want my life back. I need to explore the new world I've found and work out exactly what's going on with Riley, the Upper who helped me win the war.

But there's something OUTSIDE. And I need to step up. Because once a leader always a leader.

It's coming.
Am I strong enough to stop it?

Insiders Series:
Inside Out
Outside In

Review:
I loved Inside Out so I was glad I didn't have to wait to find out how Trella's story continued and I dove straight into Outside In which I think I ended up enjoying even more. I'm going to assume that anyone reading this review has already read the first book so please be aware there may be spoilers ahead if you haven't.

The rebellion Trella lead has turned life on the Inside upside down and now the Uppers and the scrubs are trying to figure out what happens next. The scrubs are expecting an immediate change in their circumstances but the dirty jobs still need doing and now nobody is willing to do them. The Uppers know that changes need to be made but are reluctant to give up their living quarters and the scrubs aren't trained to do most of the Upper jobs even if they wanted to. Basically it's all a mess and everyone is looking to Trella to fix it. All Trella really wants is to go back to her old life, she never wanted to be in the spotlight and she never wanted to be a leader but she's starting to realise that she doesn't have a choice in the matter. She set things in motion and now it's up to her to find a solution. As if the internal politics wasn't enough for her to deal with Trella makes a startling discovery - there are people on the Outside. People who want in and who may not have the best intentions. Can Trella unite the Insiders and help them work together to keep their world safe?

Trella has a lot of growing up to do in this book, she is young and doesn't want the responsibility of being in charge of the Inside which was completely understandable but things are falling apart without her input and people are looking to her for guidance. There were times when I felt a little frustrated with her because she kept trying to walk away from it all but she does pull herself together when it counts and once she sets her mind to something she gives it her all. I have to admit I missed seeing her and Riley together, he is around and taking part in what's going on here but they don't get to spend as much time together as they did before and I missed the interactions between them. We do get to see some of the other characters shine though, each of the members of the Force of Sheep has a role to play and there were some really surprising twists and turns along the way.

Outside In was a really fast paced story and I quickly devoured it. Maria V. Snyder did a great job of answering the questions we were left with at the end of the first book and I think she wrapped up the duology really nicely. Having said that I would still happily read more books set in this world if she ever decides to revisit it in the future.