Review: Inside Out - Maria V. Snyder 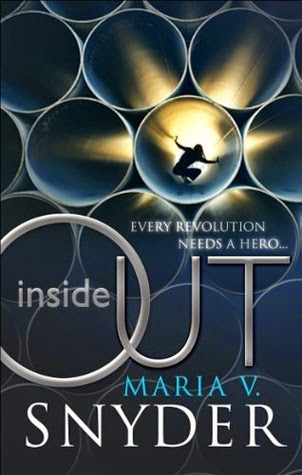 Keep your head down.
Don't get noticed.
Or else.

I'm Trella. I'm a scrub. A nobody. One of thousands who work the lower levels, keeping INSIDE clean for the Uppers. I just do my job and try to avoid the Population Control Police, who dream of recycling scrubs into fertiliser. So what if I occasionally use the pipes to sneak around the Upper levels? It's not like it's dangerous . . .

Well, turns out it is. Because I know every corridor, pipe and shortcut I've become the go-to girl to lead a revolution. I know if we find a gateway to OUTSIDE it'll be suicide plain and simple. But guess who likes a challenge.

Insiders Series:
Inside Out
Outside In

Review:
I've become a huge fan of Maria V Snyder since I discovered her Avery of Khazan and Chronicles of Ixia series but for some reason I'd never quite got around to trying her Insiders books. I'm really not sure why I left it so long and now I'm kicking myself because Inside Out was fabulous! I think I'd just got a bit bored of YA dystopia, the market has been completely flooded with the genre for a long time now and although this series was published during the early wave because I missed it at the time it's taken a while to make it's way back onto my radar. What I can say is that even though I seem to have read a ton of books in this genre Inside Out was different enough to hold my attention and I love it for that alone.

Trella is an interesting main character, she's a bit of a loner and kind of hard to relate to at first. She only really has one friend and she even keeps him at a distance so she can come across as quite selfish at times but really it's her defence mechanism. She thinks that by keeping to herself she is rebelling against the system but gradually she realises that she has fallen hook, line and sinker for the lies they have been feeding her and that she has been reacting in exactly the way the people in charge want her to. Once she starts to understand how things really work she realises that she is going to have to start putting her trust in others if she wants to find a way to change the status quo. I really grew to respect Trella, she is smart, resourceful and incredibly brave, she may not be the easiest person to get to know but once someone has earned her trust she is fiercely loyal and she will do anything to protect those she cares about. She also cares about her people as a whole, she wants to create a better life for the scrubs who live on the lower levels. She wants equality and the chance to choose her own destiny and you've got to love her for that.

I haven't even mentioned the world building yet and there is so much I could talk about there. Trella lives in an enclosed world, a giant cube built on four levels that each have a very regimented layout. There is no known exit and nobody knows what happened to the Outside or why they are unable to leave. The Uppers live on the top two levels, they have complete control over the society and make all the important decisions. They live in luxury while the scrubs from the bottom two levels do all the work to keep the society functioning. The scrubs live in overcrowded barracks, they aren't allowed to remain in family units and they work long hours doing the jobs that the Uppers think are beneath them. Scrubs resent the Uppers who have it all but perhaps everything isn't quite what it seems and when Trella finds herself caught up in a rebellion she starts to realise that it isn't only the scrubs who are being lied to.

I don't really want to say too much more about the plot but I loved watching everything unfold through Trella's eyes. I had so many questions and spent a lot of time speculating about the cube that they lived in and why they were unable to get out. Had there been a nuclear holocaust or some kind of asteroid? Was it a virus? Were they underground? Would they be able to return to the surface? No matter how many possibilities I came up with I didn't once guess at the real answer and it was nice to be so surprised by it. I'm just going to say that even if you think you're bored of YA dystopian stories it is well worth picking up a copy of Inside Out. I thoroughly enjoyed it and I can't wait to start on the second (and final) book Outside In.