Review: Because of You - Jessica Scott 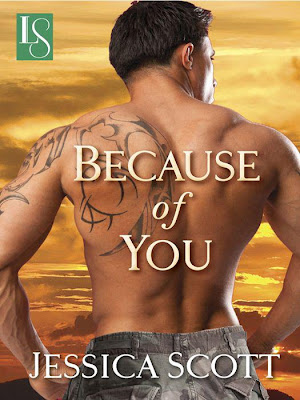 From the war-torn streets of Baghdad to the bittersweet comforts of the home front, two wounded hearts navigate the battlefield of coming home from war in this explosive eBook original from newcomer Jessica Scott.

Keeping his men alive is all that matters to Sergeant First Class Shane Garrison. But meeting Jen St. James the night before his latest deployment makes Shane wonder if there’s more to life than war. He leaves for Iraq remembering a single kiss with a woman he’ll never see again — until a near fatal attack lands him back at home and in her care.

Jen has survived her own brush with death and endured its scars. And yet there’s a fire in Shane that makes Jen forget all about her past. He may be her patient, but when this warrior looks her in the eyes, she feels — for the first time in a long time — like a woman. Shane is too proud to ask for help, but for Jen, caring for him is more than a duty — it’s a need. And as Jen guides Shane through the fires of healing, she finds something she never expected — her deepest desire.

Review:
I've only recently started to get back into reading contemporary romance but Because of You has definitely put me in the mood to read more stories about military heroes! This is an incredibly emotional book, one that bought tears to my eyes several times but also had me laughing out loud. This impressive debut from Jessica Scott has left me desperate to get my hands on her next book and luckily I only have a few months to wait for it's release!

Shane is a Sergeant in the army and his whole life revolves around protecting the men he serves with. His only focus is getting his men through the war with as few injuries as possible and it tears him up inside when one of them is hurt or even worse killed. When he is injured in a bomb blast he hates being stuck in an American hospital while his team are still out in Iraq fighting. Being a soldier is what he does best, it's the only life he knows and the idea of not being able to continue the fight leaves him feeling lost, angry and frustrated. Jen is a nurse who works at the hospital where Shane is recuperating. They had met in a bar before he left for Iraq and there was definitely chemistry between them but they both have reasons not to pursue a relationship. Jen has emotional and physical scars from a battle with breast cancer and although having a mastectomy saved her life she feels like less of a woman because of it. She is afraid of getting close to a man in case he rejects her because of her scarring.

Both Shane and Jen are incredibly strong characters, they always put other people's needs before their own and they are the kind of people who will do anything to help or protect those around them. They may be dealing with very different problems but their experiences give them unique insight into what the other is facing and together they are able to work through their issues. I loved watching the way their relationship develops as they slowly fall in love. They share some really sweet and emotional scenes but they also have scorching chemistry that is impossible for either of them to resist. They make a wonderful couple and I loved every scene with them both in it.

One of my favourite things about the book was the interaction with the secondary characters though. Jen is friends with the wives of several of the men in Shane's unit and we get to know them and their husbands. Jessica Scott shows all the different sides of being a military wife - how much they love their husbands and are proud of what they do but also how hard it is to effectively be a single parent for so much of the time. How difficult it is to constantly have to say goodbye to the one they love and know that there is a possibility that their husband won't come home safely. I'm left in awe of all military wives - you'd have to be a very strong woman to deal with everything they face on a daily basis. As much as you get to see things from the wives point of view you also see it from the side of the husbands. These soldiers are every bit the heroes we all know they are but it takes a toll on them spending so much time away from their families and facing the horrors that they see in the war zone they are stationed in. They all deal with things in different ways and I loved the humour and banter between them.

As much as we follow Jen and Shane's story we also get to know some of the other couples and I fell in love with all of them. I hope we get to see more of Carponti and Nikki as the series continues but I am also left desperately wanting a resolution to Trent and Laura's story. Because of You was a wonderful book, at times it makes for uncomfortable reading because you can see how true to life it is but it is also full of humour and the romance is lovely. Until There Was You is at the top of my wish list and I would recommend this series to anyone who enjoys reading about military heroes.