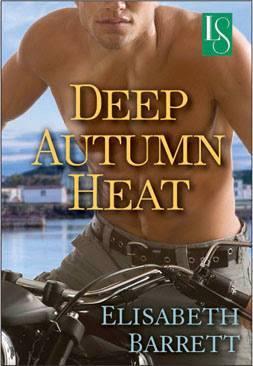 In this sexy new Star Harbor romance series, featuring the too-tempting Grayson brothers, a celebrity chef turns up the heat for a local café owner—and things start to sizzle.

Lexie Meyers decides there’s nothing sweeter than watching Sebastian Grayson’s perfect, wicked mouth devour her coconut cake. He’s hot, he’s hungry, and he’s sizing her up like she’s the best thing on the menu. But she’s been burned in the past and flings just aren’t her thing. Too bad Sebastian can’t resist a challenge.

Worldly, famous, and notorious with the ladies, Seb had planned a weekend of fishing and relaxation with his brothers. Until Lexie, with her kissable lips and frosty “get lost” attitude, makes him want to forget his culinary empire and create some magic with her. After he fires up his charm—including challenging her to a televised cook-off to break through her resistance—it’s now hotter in the bedroom than it is in the kitchen and Lexie isn’t sure whether she’s lost her mind . . . or just her heart.

Review:
Deep Autumn Heat is Elisabeth Barrett's debut novel and the first book in her Star Harbor series staring the sexy Grayson brothers. If you like a not quite reformed bad boy then you're going to love sexy celebrity chef Sebastian but I have a feeling his brothers are going to be just as hot to handle and I can't wait for more of Val, Cole and Theo. I do love a series that is set around a family of characters that you can get to know and love more and more with every book and this left me very excited to pick up Blaze of Winter when it is published in September.

Seb hasn't lived in Star Harbor for years but he returns at the same time every year to spend time with his brothers as they remember their father on the anniversary of his death. Their time together is usually spent fishing and catching up but Seb takes one look at Lexie and finds himself distracted. He should be focusing on his family and spending any spare time he has working on opening his new restaurant or planning the next series of his cookery show but all he can think of is the spitfire who runs the local restaurant and her delicious coconut cake. Seb didn't make a great first impression on Lexie though - she immediately pegged him as an arrogant ass and put him back in his place. He isn't used to having anyone stand up to him and as a celebrity he is usually fighting off the women so when Lexie seems immune to his charm it immediately makes him want her more. Lexie can't deny that she is attracted to Seb but the last relationship she had ended with a restraining order and her moving half way across the country to escape her ex so she is understandably wary of getting involved with anyone again.

I loved the banter between Lexie and Seb, she stands up to him and challenges him in ways that nobody else has done in years and he can't resist her. She is more reserved but when someone as attractive as Seb turns all his attentions on her he makes it very hard for her to resist. They have great chemistry but don't rush into a full on relationship too quickly and it is Lexie who is most determined to keep him at arms length. We are also introduced to a great selection of side characters, obviously Seb's brothers are going to have main roles in future books but I hope we also see more of the other town members and would love to see Lexie's right hand man Buster get his own happy ending.

I think this will be perfect for fans of Jill Shalvis' Lucky Harbor series, it has the same small town feel to it with likeable characters and fun family dynamics. I can't wait to read the next instalment and will certainly be keeping an eye out for more from Elisabeth Barrett in the future. Deep Autumn Heat is highly recommended for light hearted contemporary romance fans.