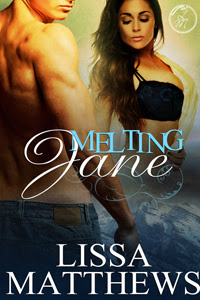 Graham Hall is a twenty-six year old Texan with the job of his dreams: being a freelance travel writer for a national publication. He’s just finished his latest article about small winter resort destinations in Colorado and has earned some personal down time. With the six month lease not yet up on the small cabin he rented, Graham decides to stick around the area for a while and in the process, finds himself agreeing to a blind date with a feisty, down on her luck in the love department, candy maker named Jane.

After all, what could it hurt?

Jane, completely oblivious to the set up, arrives at Graham’s isolated little valley cabin to deliver a box of her handmade Chocolate Kick truffles. From the moment Graham opens the door, Jane is tongue tied and ticked off. Edward, her business partner and most certainly former best friend, set her up. When she regains her ability to put two coherent words together, plus size, mid-thirties Jane apologises for intruding and assures Graham that she will take care of the mistake.

What ensues is a series of encounters and confrontations between Jane and Edward, Jane and Graham, and Edward and Graham. At the heart of it all, is Jane’s happiness. Edward wants this for her more than anything. Graham finds himself caught up in her tart tongue and curvy body and isn’t about to call his all too real pursuit a failure, no matter how many times she says no.

With her inability to continue denying herself the man she affectionately refers to as Cowboy Surfer in her head, she gives in and is rewarded with scorching hot sex and a lot of follow-up phone calls after she learns the truth of Graham’s attraction. His persistence leads Jane to believe that life doesn’t have to revolve around chocolate truffles, but rather should revolve around a delicious, well travelled and well built younger man.

**This book was previously published and titled as Sugar Rush. It has been revised and re-edited for re-release.**

Review:
Melting Jane is a short and very sweet novella from Lissa Matthews. This is the first story I have read of hers but it won't be the last because I thoroughly enjoyed it! Since a very bad break up with her ex boyfriend Jane has become a bit of a recluse. Working from home and living with her best friend / business partner Edward has left her with very little need to leave the house so she spends her time slobbing around in comfy clothes and perfecting the recipe for the chocolate truffles they sell. Edward is determined to help Jane get her confidence back so he decides to set her up with Graham, a travel writer who is in the area for the winter. Edward knows Graham is the perfect man to bring Jane back out of her shell but Jane isn't so keen on being set up by her best friend. Can Graham change her mind and get her to give him a chance?

This novella is perfect for anyone who is looking for a short but steamy read that you can easily get through in one sitting. The chemistry between Jane and Graham is fabulous but I actually loved the way he helps to give her back her confidence. She was so worn down by her ex that she had a very low opinion of herself and Graham is determined to show her just how special she is. Graham is absolutely adorable, a hot cowboy but also wonderfully sweet and the things he comes out with would melt even the most sceptical woman's heart! Yes, their relationship develops quickly (it is a novella after all) but it felt believable and you can't help but route for them. I also really liked the friendship between Jane and Edward, he really had her best interests at heart and I would actually like to see Edward get his own happy ending.

Melting Jane is romantic, sexy and steamy and a highly recommended read. I can't wait to get my hands on more from Lissa Matthews!

Source: Won from a giveaway hosted by Minxy at Loose Knickers and Window Lickers